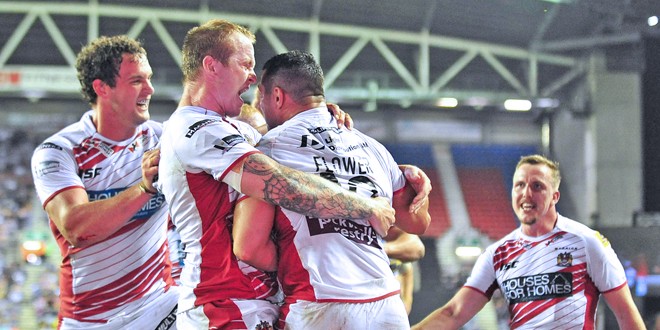 The Background
It’s first against second in Super League tonight, as in-form Leeds Rhinos will be looking to extend their lead at the summit by beating Wigan Warriors. The Warriors are unbeaten at home this season but their away form is much more up and down – however, with two wins against the Rhinos this year, one at home and one at Magic Weekend, these two closely-matched sides should provide a thriller live on Sky.

The Team News
Leeds Rhinos were expected to draft in one of Robbie Ward or Jordan Lilley for the game following a long-term layoff to Paul Aiton, but they have instead gone without either. Wigan are still without Dan Sarginson and Joe Burgess – which means both Dom Manfredi and John Bateman will continue in the backs after last week’s win against Huddersfield. Ben Flower is also expected to return.

The Stats
Leeds have won their last three home meetings with Wigan, with the Warriors’ last victory at Headingley coming 50-8 on 1 June, 2012.

Kallum Watkins needs two tries to reach a career century of touchdowns. Watkins has scored 90 tries for Leeds since 2008, to go with 8 scores for England since 2012.