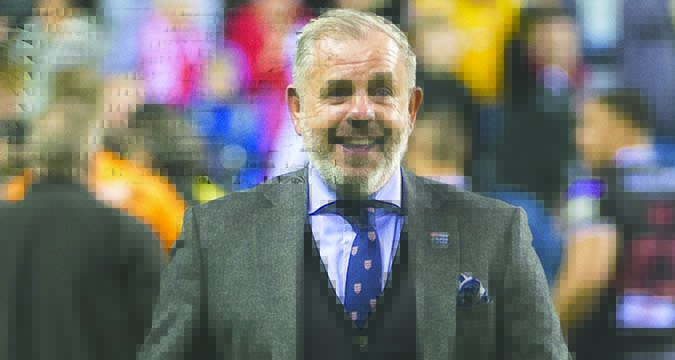 Ian Blease (pictured) is confident Salford can continue to progress in 2021, despite November’s unplanned coaching change at the club.

Ian Watson’s departure to Huddersfield Giants stirred significant emotion among the Red Devils’ supporters, and raised questions externally over whether the club can make further major finals without Watson.

But Blease has full confidence in new man Richard Marshall, and says they share the same vision of how the club should look in the long term.

Integral to that is forming a genuine player pathway that produces locally born stars for the first team, alongside challenging the top teams in Super League.

Blease explained: “You get used to the knocks, having our team ripped apart for the last few years.

“You get used to mini-rebuilding and get on with it.

“I think we’ve got resilient people within the club, and I’d class myself in that kind of mould.

“Of course there are bad days but generally it’s great to be involved in sport. I’ve had jobs where you get mucky every day and travel up and down the country working on sites, so this is a pleasure to be involved with.

“Of course sometimes it’s stressful and there’s hassle involved, but you have to take stock and it’s great to be involved in a fantastic club in Super League with such bright ambitions.

“Watto moving on just means we’ve got some new exciting times ahead.

“We believe we’ve got the right man to replace him.

“Rich is a great guy, a big thinker about the game and very articulate.

“He’s tactically astute in the modern game and likes a challenge.

“He’s on the same wavelength as me in terms of having a rugby pathway and a youth system, and I think there will be a lot of synergy as a coaching team.”

Blease already had clear plans in place to create the pathway he refers to and says that Marshall – who worked in player development at Warrington, has coached England Academy and championed Halifax’s reserves conveyor belt – has bought into that fully.

Blease said: “The educational academy we have is very important, along with the partnership with Wales Rugby League in south Wales, and we want to have a look at other cross-border partnerships.

“But we also want to do a lot of scouting and work locally with our community clubs and schools.

“Within the city of Salford we need to make more kids aware of who we are and get them to pick up a Rugby League ball.

“We want there to be a pathway from junior to high school Rugby League where we can tip players on to community clubs, and then move to Academy, reserve and first team.

“Having local lads in the first team is my ambition.

“I’m not saying the full team, but one, two, three or four – it’s always been the case in the past at Salford, but we seem to have dropped off in the last couple of decades.

“It’s my ambition to get those local kids back in the team – the big clubs all do it well, and that doesn’t come without backing and strategic planning.

“We’ve got to get ours in place with some foresight and endeavour to get to that stage, but the future is bright.

“Rich has the same ambition and drive as me, and wants to develop the same strategy we do.

“Sometimes you can get bogged down in the daily grind of Super League and you have to put your head above water and strategise for the club’s long-term future, which is a big part of my job.

“In the next six to 12 months I want to being everything to life and start making it happen.

“There’s women’s rugby, a PDRL team – there’s a lot of scope for us to become a proper Super League club.

“We’re debt free now, which is massive for the club, we’re on the edge of Manchester and a quarter of a million people live in the city of Salford.

“We’ve been to two finals recently and we want to continue building so that whenever we all leave we’ve left behind a legacy.”

Part of the club’s long-term planning was the introduction of a new logo for the brand last month and Blease believes that will also play its part in the Red Devils moving forward in 2021.

He added: “It’s new, it’s bright and we’re doing what we needed to do.

“All Super League clubs were approached about doing a rebrand and I think Wigan’s was done on the back of that.

“We decided to go our own route with a graphic designer fan of ours that we’ve known for a while.

“People don’t like change and I get the reasons why, but we need to be bright and appealing to new fans.

“It’s very American Football and NRL and will appeal to a different audience, as well as allowing us to have a digital marketing strategy on the back of it.

“You will always get a couple of objections and you can’t please everybody, but generally it’s been quite positive.

“We’ve got a sharp new badge that is now easily recognisable and will appeal to younger generations than me.”