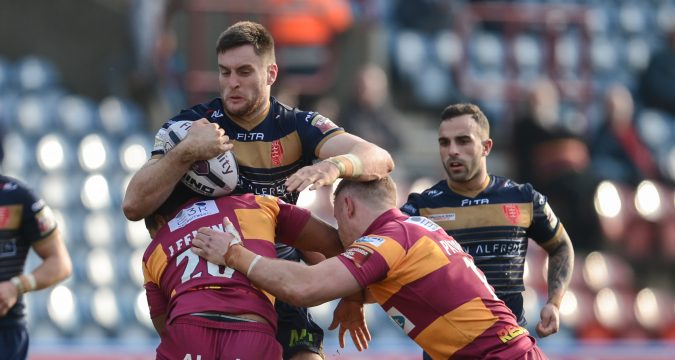 Castleford have allowed prop James Green to join Bradford on loan for the rest of the season – with promising Bulls youngster Reiss Butterworth heading the other way for the remainder of 2018.

It is understood that Butterworth, a young hooker who recently spent time at Batley on loan, has joined the Tigers with a view to a more permanent arrangement in 2019 should he impress while at the Super League side.

“I am delighted to be able to say that Reiss is joining the Tigers,” he said.

“Reiss is a young man who we have been looking at for a while now – he is a very talented, ‘eyes up’ hooker who has the potential to become a member of our first team squad in the near future. Reiss joins us initially until the end of the 2018 season and he understands that this is an opportunity for him to earn a contract with the Castleford Tigers. It’s a challenge I know he is very much looking forward to.”

Wells added: “I would like to thank John Kear and Andrew Chalmers at the Bradford Bulls for the way they have dealt with this deal and I know they are very happy with both the opportunity that Reiss now has, as well as the player they have gained in return.”

Meanwhile, the Bulls have boosted their squad for the League 1 run-in with the addition of Green from the Tigers until the end of the year.

Green has found opportunities hard to come by since joining Castleford at the start of this year – but he is available for John Kear’s side with immediate effect.

“I think it benefits everybody. James is an established prop forward that has a wide range of experience,” said Kear.

“He has played at some good clubs and he will add something to us as a group, especially when you realise the immediacy is Hunslet away and York at home. To have someone of his calibre come in for those two games is really important.

“I had James in the middle of a big set at Batley, so you may well see a theme emerging because I think if you can get a big middle unit that can get you going forward, then your half-backs can play off the back of that and your guys on the edges can finish.”