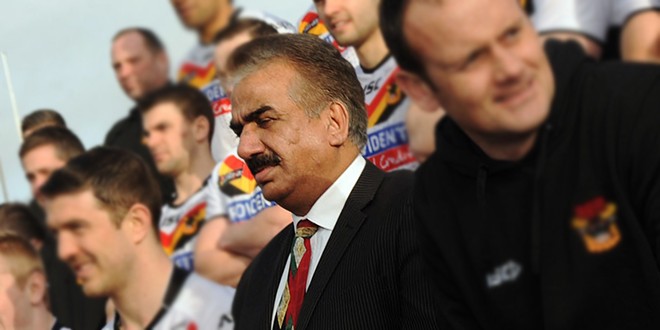 Who owns the Bradford Bulls has still not been finally settled, after last Monday’s meeting between Omar Khan, the three reinstated club directors Mark Moore, Andrew Calvert and Ian Watt, debenture holder Marc Green of Safeguard Security and Ralph Rimmer, the Operational Director of the RFL.

The meeting succeeded in persuading Moore, Calvert and Watt to withdraw their resignations as Bulls directors, but it didn’t resolve the issue of who owns the club, with talks having been ongoing last week.

The issue arises because Khan claims to have a binding contract to sell OK Bulls Ltd, the company that owns the club, to Moore and a former director Ryan Whitcut for £300,000.

The money has not been paid, but League Express understands that Khan insists that Moore and Whitcut now own the club, while owing him the £300,000 purchase price.

With Whitcut no longer a director, League Express understands that the three current directors would prefer a new deal whereby they bought the company. They have funds available to invest into the club, but are not prepared to do so until the ownership issue is resolved.

“All parties concerned are working to maintain positive levels of progression, with a view to a final agreement being made over the club’s ownership in the near future,” said a statement issued by the club last week.

The position is complicated by the fact that Safeguard Security is demanding the repayment of its £180,000 debenture.

Meanwhile the club continues to make preparations for the new season, with all tickets for the 2014 shirt presentation evening on Friday 17 January having been snapped up by supporters within 24 hours.

Head coach Francis Cummins, captain Matt Diskin and vice-captain Luke Gale will all address supporters, and the Bulls squad will be presented with their playing jerseys ahead of the coming campaign.