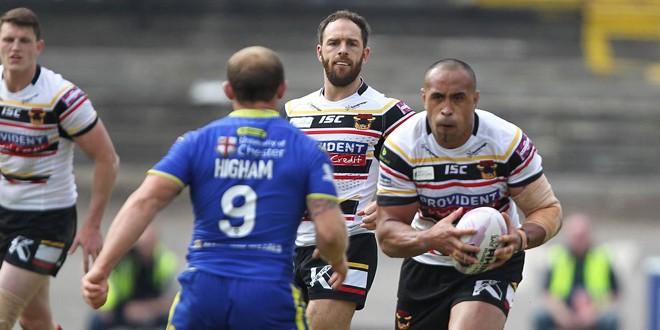 Bradford Bulls could welcome back three key players this weekend, as they prepare to head to France to take on Catalan Dragons.

The Bulls have been without a whole host of first team players for large parts of the season – including the likes of Dale Ferguson and Matty Blythe. However, their worries in the pack will be eased this weekend as Antonio Kaufusi returns after being ineligible to face parent club Huddersfield at Magic Weekend.

And fellow prop Manase Manuokafoa and lock James Donaldson could also be back to give boss Francis Cummins some relative headaches for the trip.

“We might have more than two props which has been a first for about four weeks, to be perfectly honest,” Cummins told the media.

“I say might because we’ve been here before; but Kaufusi is obviously available, Nas should be there and we could have Donno back, too.

“We’re starting to look more like a team at long last. We’ve had a tough few weeks on that front because we’ve been low on numbers over the last few weeks.”