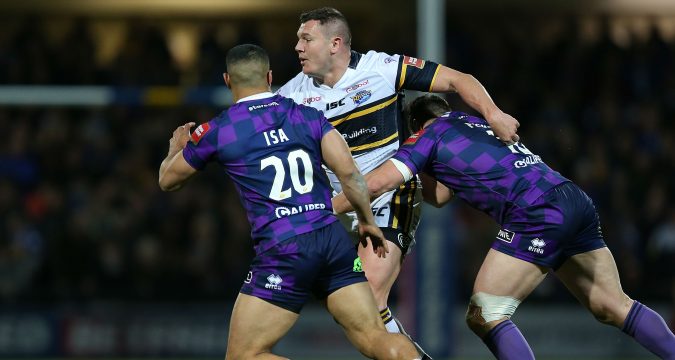 Brett Ferres insists it is time for him to “become the player Leeds signed” after a frustrating two seasons with the club.

2017 proved to be a horrendous year for Ferres as he struggled to overcome knee and groin injuries, which plagued his entire campaign.

Despite being fit for selection for the majority of the year, the severity of his injuries meant the 31-year-old hardly ever trained, instead, he spent the week in the treatment room with medical staff, patching him up on a weekly basis to ensure he could play at a weekend.

But it came at a price for the England international, whose form dipped and resulted in him not making England’s World Cup squad.

Although a Grand Final triumph came at the end of the season, Ferres admitted it was a frustrating and gruelling season on a personal level.

However, the backrower is now finally on the mend, with post-season operations ending his injury woe.

Rehabilitation will result in him missing the opening month of the season, but when he returns, Ferres is adamant he will recapture his best form.

“Last year I was a shadow of the player I have been,” he said.

“I signed for Leeds Rhinos as a player who had just played for England, been named man of the match in a Test, scored tries and had a really good tournament against the Kiwis. But I just haven’t produced that for Leeds.

“It was the biggest achievement of my life playing in a Grand Final and winning it. But I look back and think there were some players who deserved the place on a Grand Final bench more than me.

“I owe something to Mac (Brian McDermott) for selecting me. I personally told him that they stood by me and I owe the club. My objective is to get back on that field and be the player that this club signed two years ago.”

In a brutally honest interview, Ferres opened up about the level of anguish he has endured throughout his injury-hit spell.

“My knee just hasn’t been able to cope with the day-to-day life of Rugby League,” he said.

“I’d turn up for training and be on my own every day and make ends meet to try and get out on the field at the end of the week. The physios and doctors did a fantastic job, but there were a lot of occasions when I probably shouldn’t have played.

“This is embarrassing, but over two years I’ve probably trained no more than 50 times. Bear in mind we train every day, but I just couldn’t physically train, so I was sitting on a bike. It’s about getting my body right and the rugby will then come.”

Thankfully, things are now looking up for Ferres, who is aiming for a return to the field in March.

“I’m finally fixed and ready to go,” he said.

“I’ve had a really troublesome time with my knee and groin at Leeds, but finally I’ve just had the operation to rectify the issue.

“I’m lucky to be in a position where hopefully the third year is the lucky one where I can repay the club and enjoy playing again.”

This article first appeared in League Express. Get news like this first every week by purchasing the paper on Monday or by getting an online edition that can be viewed on Sunday evening at totalrl.com/le.