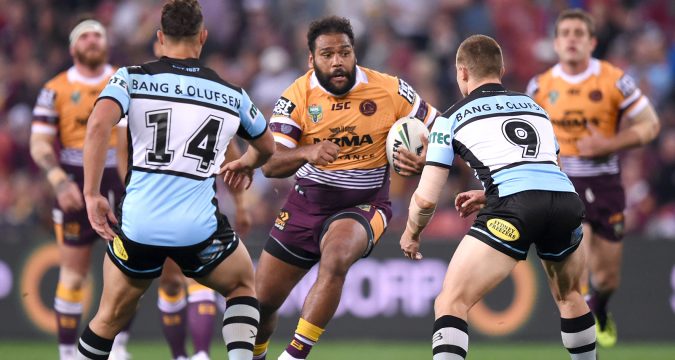 Brisbane Broncos held on to a 12-10 lead for half an hour to move within two points of the top of the NRL ladder.

Darius Boyd’s move to centre for the second game in succession paid dividends early.  He intercepted Matt Moylan’s pass and then offloaded to Corey Oates who finished the last 50 metres.

The Sharks responded quickly when the ball was kept alive on the last tackle. Fifita fended away from a tackler and offloaded to Valentine Holmes who crashed over.

But the Broncos took the lead once again when Matt Lodge crashed over after a great run by Corey Oates. Brisbane would take that 10-6 lead into the half-time interval.

But, only four minutes after the restart, James Segeyaro dummied and broke through the middle of the ruck. Holmes was on hand to record his second try, a try that takes him to the top of the NRL try scorer table. Townsend bizarrely hit the post with the conversion meaning the scores stayed level.

Brisbane edged themselves ahead through Jordan Kahu’s boot and managed to keep that lead for the remainder of the game.