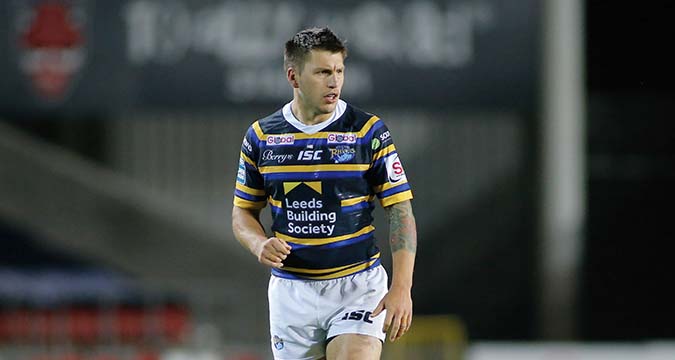 Leeds Rhinos winger Tom Briscoe believes Super League will reap the benefits of an extended pre-season once the new campaign kicks off.

An already later start date has now been pushed back a further two weeks to March 25, meaning that most clubs will have had pre-seasons of ten weeks or more together.

That has been unheard of in recent seasons and Briscoe believes it will benefit the players significantly.

“A lot of players, especially those on the international scene, haven’t had a break for a number of years.

“It will do them the world of good, and the other side is that everyone comes into training together right from the word go.

“We’ve got a couple of new signings that will come in later, but the majority of the squad have all been in together.”

Asked about the Rhinos’ prospects for 2021, Briscoe responded: “We can go into this season confident.

“We’re looking to build on the Challenge Cup win and hopefully go further into the play-offs.”

Off the field, Briscoe is facing up to his next education challenge, having been accepted to begin a doctorate in Sports Performance and Physiology.

“I started as an undergraduate six years ago, and graduated last year with first-class honours,” he explained.

“It’s been tough – you go through stages towards the end of semesters where it gets harder with all the revising and having your projects and assignments to finish and hand in.

“On the whole I kept on top of the workload, and doing it part-time helped.

“I couldn’t have done it full-time with family and rugby.

“On the whole I enjoyed it and learned a lot that’s transferable to rugby.

“You get to see why we do things in training and the sports science behind it.

“It was really helpful having those guys around at training to get their experience or help if I was struggling with anything.

“I can’t thank the people at the club enough, and the guys at Leeds Beckett who got me onto the course.

“I want to go into lecturing and research at the university, that’s the end goal.

“It’s only been in my last year or so that I decided to go down that path – I went into it thinking I’d go towards a strength and conditioning or physio role after it.

“But from seeing the work and talking to the guys at university, and how much I’ve enjoyed that, it’s led me to want to try and go down that path.”

Briscoe is also using his knowledge to help a couple of his Rhinos’ team-mates.

He said: “Cam Smith and James Donaldson are doing their undergraduate course and are in their second years.

“Before they applied they came and asked me how university was, and I said it was worth doing and sticking with.

“If you put the work in it’s rewarding when it pays off; keeping on top of the workload is the main thing.”

Completing the course opens up the possibility of Briscoe becoming Super League’s first playing doctor – a prospect he admits appeals to him.

“I’m 30 now, and playing at 36 isn’t too much of a push with all the sports science available now that allows players to go on longer.

“Hopefully I’ll get it done quicker than six years, but we’ll see how it goes.”

The Rhinos will return to training on Monday after having had to abandon their pre-season on 21 January after six players and one member of their training staff tested positive for Covid.