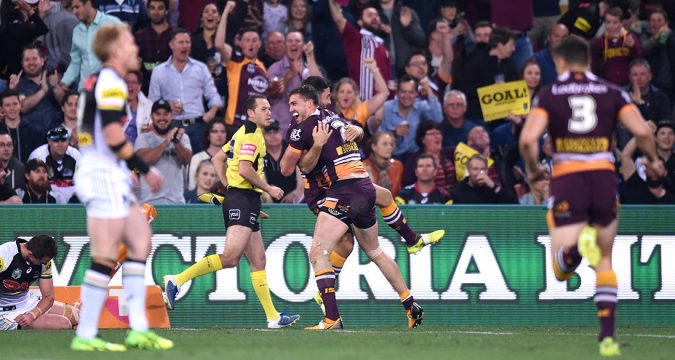 Brisbane Broncos defeated Penrith Panthers 13-6 at Suncorp Stadium on Friday to progress to the last four of the NRL play-offs.

They now face a trip to Melbourne to face the Storm next weekend.

The only try of the first half came when Ben Hunt put Corey Oates through a gaping hole, with the winger running 55 metres to score in the left corner. Jordan Kahu couldn’t convert from the sideline, but he extended Brisbane’s lead to six in the 14th minute, slotting a penalty goal from right in front of the uprights.

Oates had to be taken from the field, however, when he suffered a serious head injury, colliding with his team-mate Anthony Milford in the 21st minute. Oates was stretchered off the field with the crowd looking on with great concern.

Penrith stand-off Tyrone May came off the field shortly before the interval with a knee injury.

James Roberts extended the Broncos’ lead on 47 minutes, with Kahu’s conversion making it 12-0.

The Panthers responded on 64 minutes when Reagan Campbell-Gillard took an offload from Bryce Cartwright to touch down under the posts, with Nathan Cleary’s conversion reducing the margin to six points.

But that margin was increased to seven points when Kahu landed a field-goal with ten minutes to go.