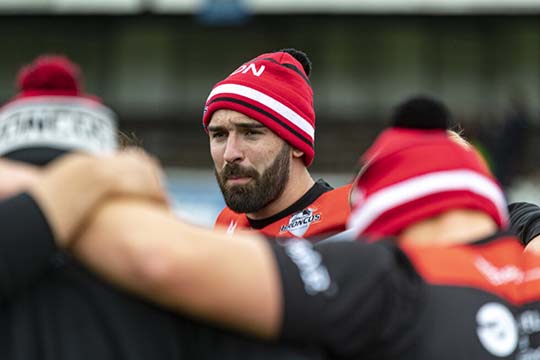 London Broncos skipper Will Lovell said atmosphere in the squad is high ahead of Saturday’s Betfred Championship visit to Batley Bulldogs (2pm).

The Bulldogs are one of the division’s in-form teams, winning their last four games against Oldham, Widnes, Newcastle and Sheffield respectively.

Sitting third in the table after five rounds of fixtures, Craig Lingard’s squad will be keen to keen to extend its early winning streak.

But Lovell insists there is no reason why the Broncos cannot target a win this weekend following Sunday’s encouraging 50-30 triumph over Newcastle Thunder at home.

“It’s been a good week of training,” said Lovell. “We’re happy with the points we’re scoring but the way we are conceding tries is frustrating.

“We’ve been working on our defensive work a lot; we’re determined to put in an improved performance from that point of view this weekend.

“Batley are a good team and have played some good Rugby League this season. Their half-back Tom Gilmore is playing especially well, we must be aware of his threat.

“They’re not a team to take lightly, particularly with the short turnaround. We’re just starting to build a bit of momentum so a positive result away from home would stand us in a strong position.”

It has been a quick turnaround for the Broncos’ squad this week.

Days off for recovery on Monday and Thursday provided three days for Head Coach Danny Ward to work with his men.

Lovell said three days of training mixed with two days of rest have granted additional time for players to suitably recover from minor knocks and niggles.

He added: “It’s not ideal having three days to work, but there are bigger problems in the world right now and the mindset in the squad is very positive.

“It’s given us a chance to get two days of recovery in during the week which is important for the team. We are taking each week as it comes and know that as a squad we are still growing. We are still a long way off where we need to be.

“In time, we want to look back on games like this positively.”