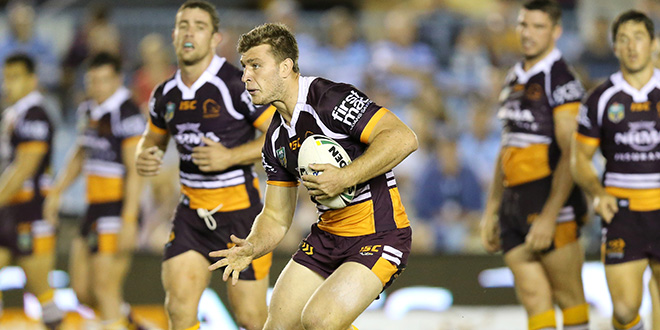 Brisbane Broncos were far too good for the Canterbury Bulldogs today at Suncorp Stadium, winning 42-12 on the back of a spell of scoring three tries in 15 minutes in the second half, in a period in which the Bulldogs hardly touched the ball.

The Broncos’ squad was unchanged from that announced on Tuesday, with Kodi Nikorima starting at fullback and Jamayne Isaako dropping out of the side.

The Bulldogs made some positional changes, with Matt Frawley starting at halfback, Moses Mbye shifting to hooker and Michael Lichaa moving to the bench.

The Broncos led 16-6 at half-time, although the Bulldogs had taken an early lead through a converted try from Marcelo Montoya, with the Bulldogs looking dominant in the opening quarter.

But then Broncos hooker Andrew McCullough broke 30 metres downfield and sent centre Tautau Moga for a further 45 metres to score by the posts to equalise on 24 minutes.

As half-time approached Brisbane when Joe Ofahengaue’s offload created a try for Ben Hunt, and Hunt then played a part in a second try just on the interval by Jordan Kahu.

The Broncos added a second-half penalty and extended it with a try from Kodi Nikorima. They then added further quickfire tries from Josh McGuire and James Roberts to settle the outcome.

Broncos captain Adam Blair was sinbinned ten minutes from the end for a professional foul and the Bulldogs scored their second try by Chase Stanley, but by then it was too late to rescue the points.