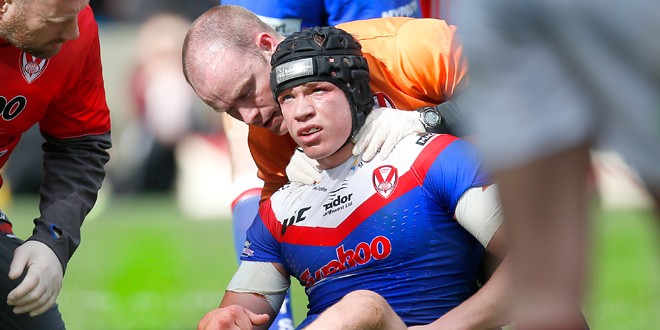 Nathan Brown has insisted that referee Phil Bentham’s decision to send off Brett Ferres for a spear tackle on Jonny Lomax was correct. But he defended Ferres by insisting the England second-rower is not a “dirty player”.

Ferres was dismissed in the 64th minute of St Helens’ dramatic 17-16 win at the John Smith’s Stadium in Sunday’s Tetley’s Challenge Cup fourth round tie.

Huddersfield led 16-8 at the time, but conceded nine points while they were down to twelve men as St Helens booked their place in the next round.

Brown said: “It was a no brainer [to issue a red card]. Is Brett Ferres a dirty player? No, he’s not. He doesn’t go out there to deliberately do something like that, but it was a shocking tackle.

“We’ve just seen what’s happened in Australia, and that’s a tackle that we don’t like. Brett seems like a decent fella, and he hasn’t deliberately done it – he hasn’t set out to do it – and there was a lot of punishment in the sending off because it cost them the game, but it was a shocking tackle.

“He got what he probably deserved, but he hasn’t deliberately done it. They’re not like that, the Giants, and Baloo (Paul Anderson) doesn’t coach like that. It’s just an unfortunate incident, and thankfully Jonny Lomax is healthy out of it.”

Saints were handed another tough draw with a visit to Leeds Rhinos in the fifth round, which was televised on BBC 2 on Sunday.

The RFL insisted that there was no confusion in the draw, with some viewers taking to Twitter to claim that the 6 and 9 balls, which represented Widnes and Bradford, had been transposed.

“We checked it out carefully, and we can confirm that there were no mistakes in the draw and everything was done correctly,” said RFL Communications Manager John Ledger.