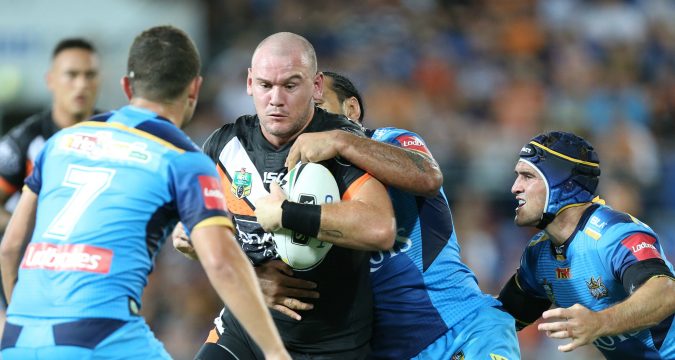 New Widnes signing Jack Buchanan is hoping he will make it to England in time for Widnes’ Magic Weekend clash with Salford.

The Vikings’ latest signing is still in Australia after completing his move to the Super League side from Wests Tigers last week, a move made by Denis Betts in the hope of injecting a boost into his side’s faltering season after a fantastic start to the campaign.

Although the forward is highly unlikely to feature in Saturday’s bout with the Red Devils, the Australian is hopeful that he will make it to the country in time to make the trip to Newcastle.

“I sure hope I’ll make it,” Buchanan told TotalRL. “I’ve heard nothing but good things about it and I’d love to be a part of it so early into my time there.

“It’s a fantastic opportunity for me to come to Widnes, it’s sad to be leaving a club I’ve been at for a while now but I’m moving on to bigger and better things.”

Buchanan’s decision to join the Vikings, who has signed an 18 month deal with the club, was aided by the words of an old acquaintance, none other than new Widnes centre Charly Runciman.

“I have spoken to Charly a few times since he’s been at Widnes and he’s done nothing but speak highly of the club, how much he enjoys Super League and how much he has improved as a player. It has been a massive influence in me coming over here.

“They’ve (Widnes) got quite a few Aussies, which should make the transition a lot easier for me. Coming to England is something I’ve always wanted to do and I’m really appreciative that I have that chance now. ”