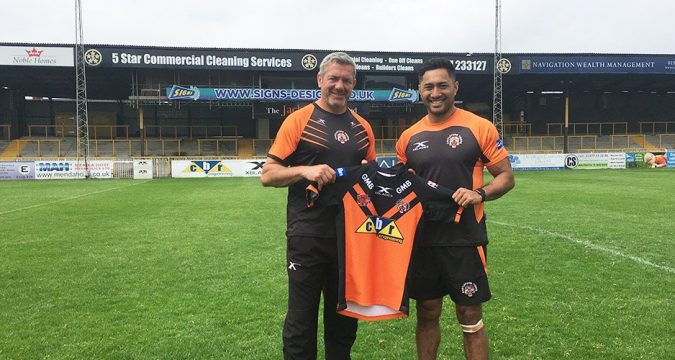 Castleford Tigers have signed fullback Quentin Laulu-Togagae from Halifax on a deal until the end of the season.

His arrival will help fill the fullback void that has lingered within Castleford’s squad all year. The club decided against replacing Zak Hardaker and opted to make Ben Roberts their fullback. But since the beginning of the season three players have all been played in the position, with Michael Shenton and Jake Trueman both standing in.

But QLT’s arrival gives Cas a bonafide fullback, albeit one that has never played at Super League level. The 33-year-old has played for Sheffield, Toronto and Fax in his time in the Championship, establishing himself as one of the most exciting players outside the top flight.

A Super League clause in his contract meant Fax couldn’t stand in his way, and he has decided to join the Tigers over a move to Salford.

“Q understands that this a six-month deal but he see’s it as a huge opportunity to test himself at Super League level and contribute to the Tigers 2018 campaign,” said Cas’ director of rugby Jon Wells.

“It is no secret that the fullback position has been an issue of concern for us since the departure of Zak Hardaker and Q’s arrival addresses that issue in the short term. Whether he stays with us beyond 2018 is now down to Q and we are all looking forward to seeing him play with pride in the Cas jersey.”

After helping Sheffield to back-to-back titles in 2012 and 2013, he eventually joined Toronto in 2016 and helped them to the League 1 trophy. But Gareth O’Brien, ironically a previous target of Cas, joined the Wolfpack, which saw him drop down the pecking order.

Halifax snapped him up and played a key role in their recent win over Featherstone.

“I think in terms of a position that we have found really difficult to fill this season, it is a key signing for us,” Daryl Powell added.

“I’ve always really liked him as a player, I think he is a great fit for the way that we play and everyone that I speak to about him says
positive things, and it gives us strength in depth in the outside backs where we have struggled a little bit recently with a couple of injuries.”

QLT added: “I only found out the move last night and my head is still spinning a little bit but I’ve been out there this morning for my first session with the boys and I’m really excited to be involved with such a great club. I already know some of the boys here and that makes it an easier transition, I had another Super League club wanting me but it was a no-brainer to come to Cas and I can’t wait to get my chance to pull on the Cas jersey.”

Meanwhile, a club statement released by Halifax said: “We have seen how effective Q has been and this has meant that Super League clubs have shown some interest in the last week,” a club statement said.

“We have a good relationship with them and don’t want to lose our best players to anyone, however in this instance we feel this is the best outcome for Halifax. We may see Q again playing for Fax at some point again this year.”