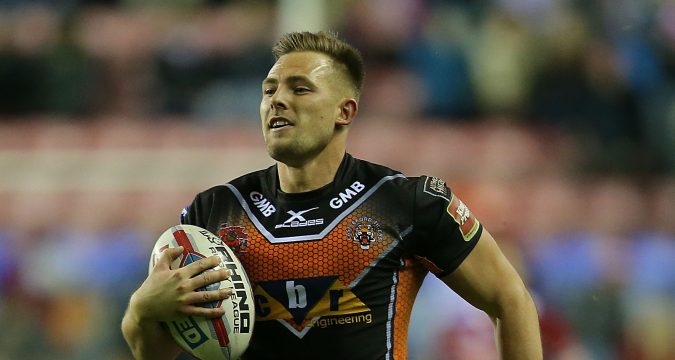 Castleford will find out on Saturday whether winger Greg Eden’s season is over: after Tigers assistant Danny Orr admitted there is still a chance he could play again this year.

Eden suffered a serious shoulder injury during last Friday’s win against Salford, in the act of scoring his 34th league try of the season.

He will not play against Catalans this weekend – and Orr said that a meeting with a specialist on Saturday will determine whether Eden’s season is over.

Orr told TotalRL: “He’s seeing a specialist on Saturday morning. He’s had an X-ray, there is a bit of damage in there but we found out Saturday morning to be exact, in terms of whether he’ll need an operation. The specialist will determine whether it needs operating or whether it’s a case of give it a couple of weeks and then crack on.”

However, Orr said that even if the injury does require surgery, there is a chance it may allow Eden to play again – but Castleford won’t know for sure until Eden’s date with the specialist.

He said: “I’ve had the exact same injury he did and I did it in 2005, a long time ago, and I was told I’d be out for 12 weeks, which would be his season. I think another player had an operation similar to this and I think he was out for seven. So if it’s that, you could get him back before the end of the season.”

Orr also revealed that forward Matt Cook is in line to return this weekend – although he, along with centre Jake Webster, will be a late call made by Daryl Powell ahead of the trip to Perpignan.

He said of Webster: “It’ll be decided later in the week. Jake has got a niggle but it’s not something that is going to keep him out for weeks and weeks, it’s just a case of whether he can manage it this week and then crack on.

“Matt Cook has a chance potentially, but the decision on him will be made later in the week. Any doubts, you know the lads have got the week off coming up so they’d definitely be fine for the start of the Super 8s, whereas if you risk them now, you could potentially lose them and set them back. There’s a couple of decisions to be made and they’ll be made on Thursday and Friday.”

Orr also said that forward Larne Patrick, who missed the win against Salford due to a health issue, is on track to return sooner, rather than later.

He said: “I’ve not seen Larne but from what I’ve heard he was severely dehydrated and his immune system has taken a knock.

“From that I think he picked up a bit of a cold and even some tonsillitis in there, actually. I don’t think it’s anything serious and I’m sure Larne will be fine. I would imagine he’ll be fine for the start of the Super 8s.”