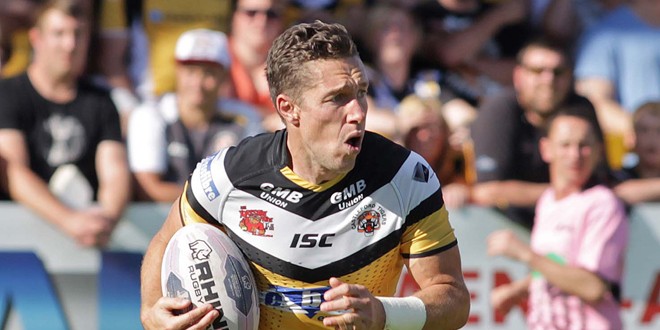 Castleford full-back Luke Dorn is ready to finally scratch a nine-year itch this weekend when he takes part in the Super League play-offs for only the second time in his career.

The Australian was part of the London side that reached the play-offs in 2005, but they were knocked out in week one by eventual winners Bradford Bulls.

That is the only time Dorn has competed in a play-off match in England and, nine years after that last game, the 32-year-old is ready to finally make his mark on the play-offs with the Tigers in 2014.

“We finished sixth and we drew Bradford at Bradford. They were too good for us, but that was a long time ago.

“It’s going to be quite different this time around; I don’t want to have to tackle Lesley Vainikolo for starters!

“We were a good team back then, we did well to get where we got – but this is a completely different ball game this time with Castleford. Our team is a great side in terms of consistency. Every year since I’ve been set up and ready to go back to Australia at the end of the season – but this is a very nice change to have.”

Dorn will be joined at Castleford next year by two more ex-London team-mates – Scott Moore and Mike McMeeke. The utility back believes McMeeken in particular will thrive in a winning culture, saying his rich understanding of the game will stand him in great stead.

“Mike is one of those guys who is the first in the gym and watching videos all day,” he added.

“He’s diligent in everything he does and he’s got everything else ready to go. He’s got a real understanding of the game, and is one of the London boys who has come through and knows the game well – he’s a real Rugby League nut.

“When he played against us the other week he was hard to handle, and I think in the right environment, which we have, he can do really well.”