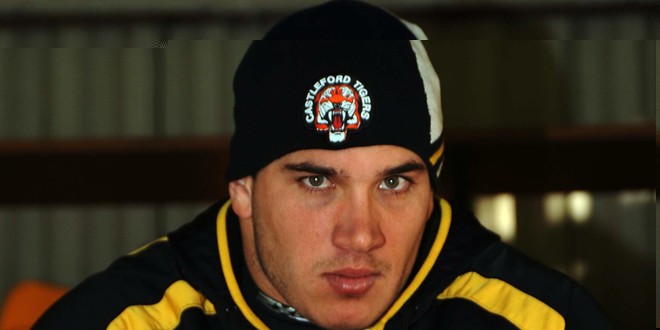 Although some of the Castleford squad have had a run out with a game against Halifax on Boxing Day, one man who is chomping at the bit for the season to start is winger Justin Carney.

“I’m pretty much sick of just training now and want to get on with the season,” said Carney, who did not figure against Halifax.

The Australian star, who joined the Tigers in 2013, says that the club is in a much better position now than 12 months ago.

“It’s been a lot tougher this year and we have done a fair bet of running. We have had to put our heads down and commit 100 per cent. The intensity is much higher than this time last year, when we were all over the shop.

“Daryl [Powell] has brought us more together as a group and that is what pre-season is all about, because it’s an awful time, the worst time of the year.

“No one wants to get up first thing on a Saturday morning to do hills, especially when it’s cold. But we have a more experienced group this year and we are being a lot harder on ourselves than last season.”

Carney believes that he is now at the stage of his career where he should be considered as one of the senior members of Powell’s squad.

“I’m an experienced player now, one who has been around for a long time, but I’ve always kept a step back and let others do the talking,” said the 25-year-old.

“This year I want to get involved in the leadership team. But that’s a big ask because you have to practise what you preach and put your best foot forward every week. If other players are going to listen to you then you have to show them that you can do what you expect of them.

“That’s something different for me. It comes with time, and for me to progress I have to become a better team player rather than just an individual.”

Last season Carney’s act of passing his boots to a young fan called Kenan Wilkes after a game turned out to be a pivotal moment of the season.

“Kenan is a good little fella and one of the first people I got introduced to when I came here,” said Carney.

“That day I was shot at – my feet were bursting out of the side of the boots – and I spotted him and just gave him my boots; I didn’t want any story, I just wanted him to have my boots. I remember as a kid if someone did that for me I’d be over the moon.”