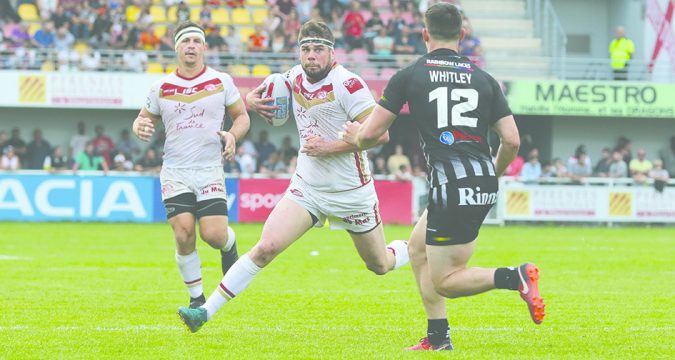 Catalans prop Remi Casty revealed that making the Super League Dream Team was the cherry on top of the cake in what has been a fabulous season for the forward.

The 33-year-old, who has made 20 appearances for the French National team, was named in the Dream Team for the second time in his career, six years since his first appearance.

Casty put the achievement down to pure hard work, determination and a hunger to win trophies with his team.

He said: “When you play Rugby League the aim is always to win trophies with your team. When you win individual accolades like selection for the Dream Team, that makes you very happy too.

“I’m surprised I made the team because there are a lot of good props in Super League.”

After a disastrous start to the season, many tipped the Dragons to struggle in maintaining their Super League status. However, a remarkable run of form saw the French side avoid the Qualifiers by three points as well as winning the Challenge Cup at Wembley for the first time in their 18 year history.

Discussing a rollercoaster of a season filled with plenty of highs and lows, Casty stated: “We are a unique team in the sense that we are the only French team in Super League.

“We had a bad pre-season due to only having seven players for some of it because it was a world cup year. 14 players were on international duty so it’s hard to have a good pre-season with so many players missing.

“After the Castleford game where we lost 41-0, we had a good chat as a group of players with the coaching staff.

“We then went on to win games week after week which resulted in a very successful season after finishing in the top 8 and winning the Challenge Cup against Warrington.”

Casty, who rejoined Catalans ahead of the 2015 season after departure to the NRL and the Sydney Roosters in 2014, was the only Catalans representative in the Dream Team.

This highlights just how important the captain is to his team.

Asked what the Dragons can achieve in 2019, he said: “Next year will practically be the same group of players. We have some great players including the likes of Sam Tomkins so if we continue to work harder we can achieve something great again.”

“We want to retain the Challenge Cup. It may be a bit early to say that but when you win something, you want to keep winning it again and again. It doesn’t come easy though, you have to work even harder to achieve it again.”