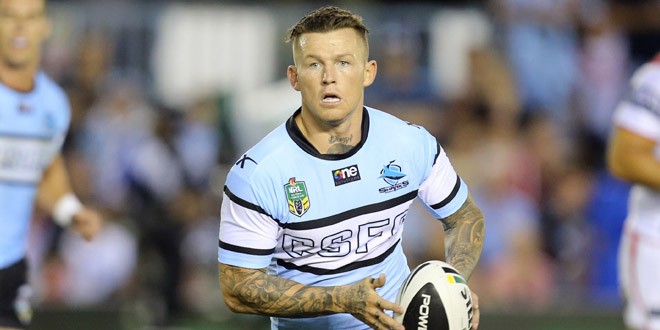 Carney, 28, has agreed a three year deal that would keep him at the Gilbert Brutus Stadium until the end of 2017 season.

The former Dally M medal winner, de-registered by the NRL for a breach of Cronulla’s code of conduct, has scored 59 tries and 827 points in 166 NRL appearances with Canberra, Sydney Roosters and Cronulla.

He also played three State of Origin games for New South Wales in 2012 and made his Test debut in 2010.

Catalans Dragons Chairman Bernard Guasch said “We are delighted that a such talented player chose our club despite a fierce competition with other Super League and Rugby Union clubs.”

“My desire was to attract a world-class player for the tenth season of the Catalans Dragons in Super League and I think we can be really satisfied today.”

“After Stacey Jones, Greg Bird or Steve Menzies, it’s another world class player who decides to join our club.”

“His agent David Riolo has received a lot of propositions from different clubs but Todd has been convinced by our ambitious project for our tenth season in Super League.”

“We received the agreement for his agent today and we are now waiting for the green light of the RFL who will, I’m sure, register Todd.”

“He is a world class player and he will be a great addition not only to our club but also to the Super League.”

“I’m sure the RFL and all the rugby league fans who follow Super League will appreciate watching such a quality player in our competition.”

“The Catalans Dragons Board is committed to support Todd Carney in his new life, far away from the media pressure he had in Sydney.”

“Greg Bird, who now plays in the NRL and for Australia, resurrected his career during a 12-month spell in the south of France, and became, after his time here, the brilliant player he is now. I’m sure Todd will seize this great opportunity to show the great player he is. ”

“With Todd as the skipper, the show will be guaranteed at Gilbert Brutus stadium and everywhere for the pleasure of our fans and sponsors.

Catalans Dragons Headcoach Laurent Frayssinous said “I’m really excited to add Todd Carney to the squad. He is one of the best players in the world.”