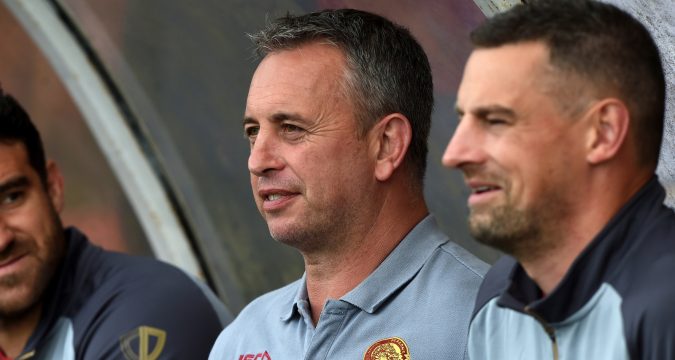 Catalans Dragons coach Steve McNamara says the club must continue to focus on its long-term ambitions as well as trying to claw its way up from the bottom end of Super League.

McNamara’s side have experienced an upturn in form over the last six weeks, winning three times, leading Wigan 21-0 before losing and holding leaders St Helens to a 26-12 scoreline on Thursday.

But while the former England coach knows how important it is to progress this year, he insists the Dragons and their Chairman Bernard Guasch also have eyes on the bigger picture.

McNamara said: “We’re trying to establish a club that can compete in the long-term.

“There’s always short-term pressure part-way through a season, especially the way the season is structured now, with the cut-off point for the Qualifiers and promotion and relegation.

“But the reality is that we’re trying to build a sustainable, successful future.

“You look at some of the teams we’ve played recently in Castleford and Hull, where they’ve come from and the amount of time it’s taken to become really established at the top end of the table.

“They are a really good blueprint for us and show that there’s never such a thing as overnight success.

“There are so many things we need to change and everyone at the club is trying to do that.”

One win from their opening eight matches turned the spotlight on McNamara himself, but he insists he didn’t feel under fire in Perpignan.

“Bernard has been outstanding in his approach and what he’s looking for at the club. His support from day one has been first class.

“My eyes were fully open when I came in, and it was quite clear from some of the other organisations that I’ve been involved in that there were a lot of areas to improve.

“What is really interesting here is how different the club is – this isn’t like your normal run-of-the-mill English Super League club.

“There are different languages, cultures and ways of doing things here, and that’s part of the challenge. For me it’s the best job that was available in the game because it’s so different.”

Off the field, McNamara is continuing his own education in speaking French – when time permits.

“Trying to manage learning a new language when Rugby League coaching has to be my focus has been difficult, but it’s very important to me.”