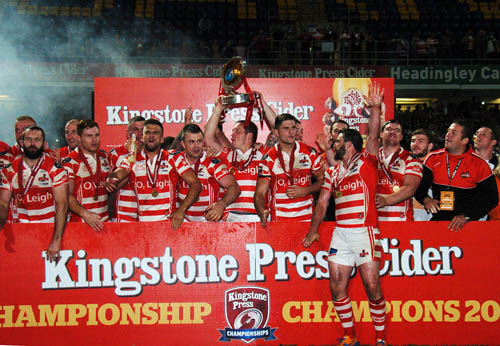 “Leigh Centurions have issued a statement to counter suggestions that have arisen in various social media that have created rumours about the club and the RFL’s dope-testing regime.

The statement is as follows:

“We can confirm that six of our players were tested by UKAD on the week commencing 23rd March 2015 and the following week the whole of our squad was tested which we have been informed by the RFL is not an unusual occurrence.

“All of our players fully complied with UKADs doping control officers in providing adequate samples as required. As of today we have not received any results from those testing processes which were carried out from UKAD or the RFL.

“Leigh Centurions Head of Rugby Derek Beaumont said: ‘It is always disturbing when people make malicious and unfounded allegations about organisations or individuals, particularly when they do it from behind an alias in order to protect their identity.

“’People should be reminded that malicious and defamatory statements made from an alias can be investigated by the police in order that the person responsible can be brought to task, which is an option I am currently exploring.

”‘Naturally when such rumours are started it has the desired effect of fans speculating and drawing their own unfounded and incorrect conclusions. Indeed, many of my players are receiving text messages from other clubs stating they have it on good authority from RFL officials that our players are banned. This has also been brought to my attention and reported on social media.

“Mr Beaumont added: ’It is completely preposterous for anyone to say that the RFL are making such malicious statements from their staff and this information has been passed to them for them to investigate.

”‘We promote a clean environment at the club and fully support the involvement of UKAD and their testing programme within the sport. We do not believe we have any problems at the club and draw comfort from the fact that we have had no results.

“‘We have been informed by the RFL that positive tests are normally reported within fourteen days and negative tests can take four to six weeks to report. To this end we continue to go about our business normally, preparing to face our next opponents.

”‘People drawing speculation from those not selected at the weekend will realise their errors when they are selected. My coaching team do not select players to squash unfounded rumours on social media.

”‘We currently have three serious injuries at the club and we do not go into specific detail on these in the public domain so as not to provide our opponents with advanced information.

“Mr Beaumont concluded: ’I hope this statement allows us to continue to do what we do best which is play an entertaining brand of Rugby League for our loyal and supportive fans.'”