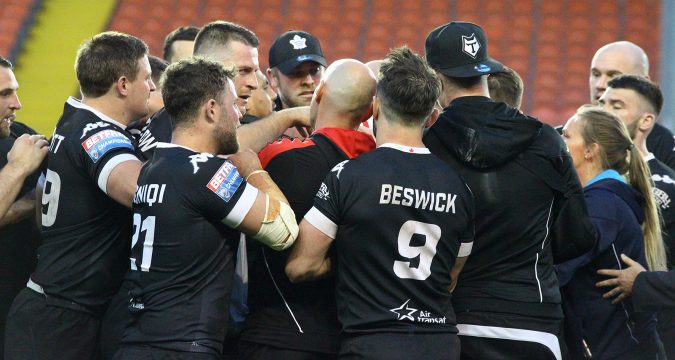 How feisty will the latest instalment of Toronto v Leigh be?

If it’s anything like the conclusion of their meeting at the Summer Bash, there are bound to be fireworks. Paul Rowley and his Toronto players clash with former club Leigh in Canada on Saturday night – and with the Wolfpack riding high at the top, they can secure their place in the Qualifiers with a win: while casting doubt over Leigh’s chances in the process. It promises to be explosive.

The battle to avoid the drop to League 1 is heating up – and Swinton can pull Dewsbury firmly into the mix on Sunday afternoon. The Lions have shown signs of improvement in recent weeks, including pushing London in the first half last week before falling away – but victory over Neil Kelly’s Rams this weekend would bring the gap to safety to just a solitary point for Swinton.

Who can stop Hunslet at the moment?

Is there any side in any league more in-form than Gary Thornton’s Hunslet right now? Six wins in succession have seen Hunslet storm into play-off contention in League 1, to such an extent that they now have a four-point cushion over sixth-placed Keighley in the race for the top five. This week, North Wales have the unenviable task of trying to prevent Hunslet from making it seven in a row..

Can Whitehaven shake off a difficult week off the field?

It’s been a tough week for Whitehaven, with the news that the proposed takeover from Stuart Harvey and his consortium has officially fallen through. Carl Forster’s side are made of stern stuff on the field though, and you can be sure Haven will be fired up to put a difficult few days behind them with victory over Keighley – and it could yet put them into the play-off places if there is a sufficient enough swing in points difference between themselves and local rivals Workington.

Who will take another step towards the Qualifiers?

Five teams, two points between them all. Forget Super League – the race for the Qualifiers is the most intriguing battle in professional rugby league right now, you could argue. Toulouse will head to Sheffield heavy favourites to strengthen their place in the top four, Featherstone will hope to do the same against Rochdale, while Halifax and London face Barrow and Batley respectively. It promises to be another incredible weekend of action in the Championship.