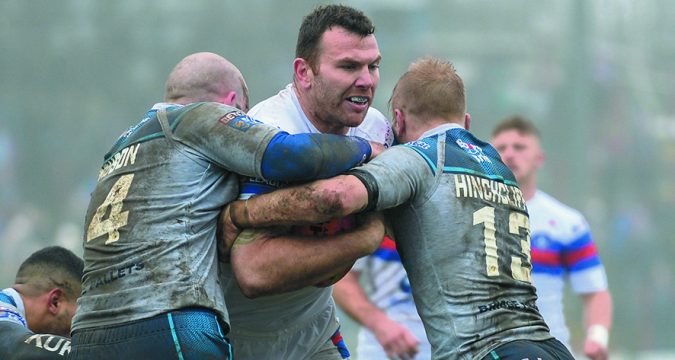 After a difficult 2020, Gareth Walker looks at reasons for optimism at each Championship club

Batley Bulldogs – Keegan Hirst (pictured) and Jodie Broughton are two quality, highly experienced signings to kick-start the club’s recruitment. The fact that the club has been keen to play this autumn displays a positive attitude to the difficult current situation that should serve it well.

Bradford Bulls – Danny Brough and Aaron Murphy are on their way to the Bulls, providing early indications that their 2021 squad will be better placed to push for promotion than this year’s was. The retention of the club’s long line of homegrown players also bodes well.

Dewsbury Rams – Lee Greenwood’s squad made one of the most impressive starts of any team to 2020, indicating they were ready to kick on this year. They aim to retain the majority of that squad, and Greenwood is forging a reputation as a highly-rated coach.

Featherstone Rovers – The club was in front of any other in the competition in terms of contracted players for next year, and an exciting week of recruitment has added to their options significantly. The fact that they continue to make Super League noises illustrates their ambition.

Halifax – Greg Worthington is a terrific first signing for next season who knows exactly what it takes to succeed at this level. After a disappointing 2019 in the league, what is effectively a clean slate to work with gives coach Simon Grix scope for change.

Leigh Centurions – John Duffy’s team exploded out of the blocks this year, and their early recruitment for 2021 – including new halfback duo Jamie Ellis and Blake Wallace – indicates they will again have one of the strongest squads. A Super League return remains the clear goal.

London Broncos – Arguably the club with the most uncertain future at present in terms of how they will approach next season. But as long as coaching duo Danny Ward and Jamie Langley are at the helm, with Rob Powell looking after youth development, their on-field future looks solid.

Oldham – Matt Diskin’s plans for next year are now well underway, with moves to bolster their pack clear in the signings of Tyler Dupree, Martyn Reilly and Luke Nelmes. With key members of this year’s squad also on board, it’s a promising start.

Sheffield Eagles – Mark Aston’s squad building for 2021 has now started to take shape, and the retention of Anthony Thackeray is a massive plus. Hopes that the Eagles will be playing in a new-look stadium in 2021 is also a huge reason for long-term optimism.

Swinton Lions – A trio of former Leigh signings in Nick Gregson, Sam Brooks and Liam Forysth should certainly strengthen Stuart Littler’s squad, and there is the promise of Martyn Ridyard to follow, which would be a major coup. Rapid winger Jacob Smilie could be one to watch.

Toulouse Olympique – Sylvain Houles has had virtually his entire squad for next year in place before most of his rivals, including the eye-catching additions of Ben Reynolds and Mitch Garbutt. With dynamic duo Johnathon Ford and Mark Kheirallah still around, they will again challenge.

Whitehaven – Home defeats to Swinton and Oldham were not the ideal start for a team hoping to avoid relegation, so the chance of a clean slate will be welcomed at the Recreation Ground. Aussie prop Ryan King and backrower Liam Cooper are exciting recruits in the pack.

Widnes Vikings – A perceived lack of know-how up front has been remedied with the signings of Matt Cook, Lee Jewitt and Paul Clough, and the decisions to stay of Matty Smith and Logan Tomkins give the Vikings experience across the park as well as in the coaching ranks, with Tim Sheens remaining.

York City Knights – The unveiling of the Minster city’s superb new stadium provides both hope and confidence that they will continue the club’s remarkable progress in recent years. The arrivals of Danny Kirmond and Morgan Smith suggest James Ford will keep that momentum going on the field.