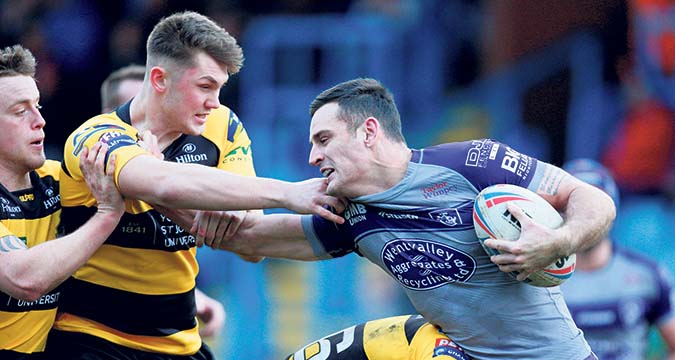 2021 is perhaps the most crucial year for the future of Rugby League in this country since 1995 and the dawn of Super League.

How it deals with whatever Covid-19 throws at it this season, whether the top-flight decides to invite private investment, and, perhaps most crucially of all, what the next TV deal means for clubs at all levels, will be crucial for the future of the game outside Super League.

Multiple reports suggest that the income from Sky could be significantly down on the last agreement, which, while having obvious implications for Super League clubs, will also have a major knock-on effect for those outside the elite.

Because, in an agreement between clubs made in 2018, the more any deal reduces, the less that clubs in the Championship and League 1 will receive.

After securing significantly increased funding the last time the two parties agreed on how television money should be distributed, that is going to come as a major blow to the vast majority.

But does is spell immediate disaster?

It will mean, however, that the clubs best prepared for this increasingly likely scenario are the ones that will emerge the strongest post 2021.

The smarter clubs will already be preparing for a big reduction now, rather than throwing all their eggs into one final basket this year.

But thankfully there are plenty of those around and there are several other reasons to feel more optimistic about the future than some would have you believe.

Rugby League clubs are, on the whole, resilient organisations that have survived through countless collective and individual crises down the years.

People should also take heart from several other factors.

Many at this level are led by vastly experienced administrators such as Kevin Nicholas, Mark Sawyer, Mark Campbell and several others that have run semi-professional sports clubs for a long time now.

They are extremely well versed in the trials and tribulations involved in keeping clubs afloat and will be fully aware of the possible scenarios ahead.

Just over two years ago, when Super League forced through a breakaway from the RFL on several fronts, many of those directors and owners worked closely together in the interests of the Championship and League 1 as a whole.

That is certainly not always the case in Rugby League, but they engendered a collective desire to do what is best for the sport outside the top-flight.

That kind of attitude is likely to be required again at some point soon.

The RFL also deserves credit for putting in place a system that rewards clubs for the way they operate with tiered central funding at present.

Clubs have to prove what they are offering their local communities on several fronts to access a percentage of the current central funding.

This has improved performance in a number of ways outside Super League, which will stand clubs in good stead for what is to come beyond this year.

Similarly, the eleven that applied for promotion recently across the two competitions had to provide detailed evidence about their current operations, a process that will also serve them well.

Then there is the fact that Championship and League 1 clubs may well be able to pursue their own television deal from 2022 onwards.

That should be immediately tempered with the fact that piles of money will not await them. Covid has hit television companies just like other industries, and second and third tier Rugby League is not as attractive to them as those of us passionate about it would like to think.

But there may still be opportunities around, and if so, the clubs need to be innovative, offering broadcasters ideas and access to live action that could take it beyond a Rugby League audience.

And, whatever the finances involved, the clubs must then work hard to maximise any exposure through sponsorship and partnership deals.

Make no mistake about it, what lies ahead for clubs outside Super League is going to be extremely difficult, and perhaps the overriding fact is that they will have to cut their cloth accordingly and reduce spending significantly.

But there are plenty of people involved in the sport at this level who are ready for the battle that lies ahead.