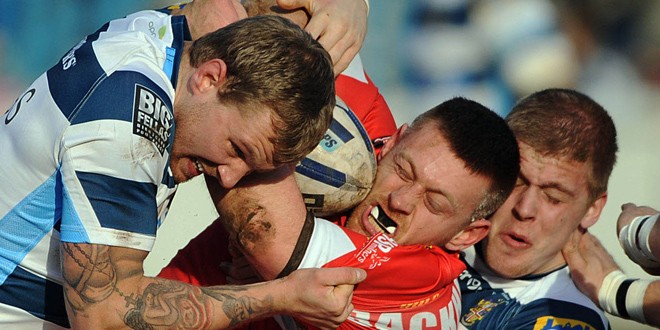 Sunday 3.00pm at Craven Park
Barrow have agreed a dual registration deal with Salford Red Devils and could hand Championship debuts to a number of players.

Liam Hulme, son of former Great Britain international Paul Hulme, is another under consideration by Goulding but the access to some of Salford’s young Red Devils is a coup especially with Goulding hinting at more changes to his team following their 54-28 defeat against the Cougars.

He has challenged his players to complete four out of every five sets if they are to give themselves a chance of staying in the Kingstone Press Championship.

“We can’t drop below 80 percent, because we’re not good enough,” said Goulding. “If we can keep it at 80 or above, we’re going to be in with a shout.”

Rovers coach John Bastian will be without Jamal Chisholm for the trip to Cumbria, while Gavin Bennion is still another week away from first-team selection.

“I thought the attitude and application of the players, from the first minute to the 80th, were of the standard we’re looking for at this club.

“We understand that Bobbie (Goulding) is on a new journey with Barrow and we wish him well, but this is a game we’ll be very focused on.

“They’ll be pretty desperate and we’ll have to be ready for that come Sunday, but we will be.”

Barrow’s Aaron Low is one game short of his 100th game of his career, while Ian Hardman is set to make his 150th appearance in the colours of Featherstone Rovers.