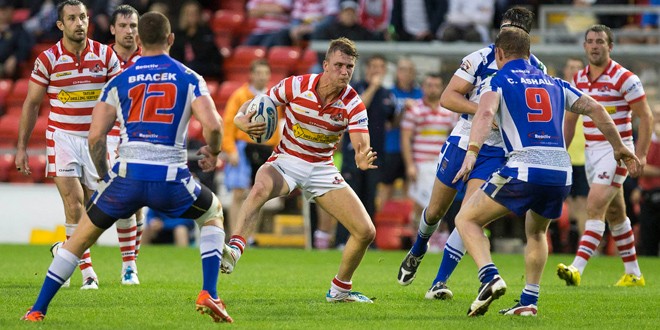 Sunday 3.00pm at The Shay
Tony Tonks will make his 200th career appearance if selected by Halifax coach Karl Harrison to face league leaders Leigh Centurions on Sunday at the Shay.

However, his milestone will be overshadowed by Centurions utility man Stuart Littler, if he steps on to the field it will be his 450th career game.

Littler recently passed the century mark in Leigh colours in a career that has been dominated with a 13-season spell with Salford City Reds, the centre or second row making 329 appearances for the Reds.

“We played well and, while I was disappointed with the final scoreline, it was a tough encounter,” said Harrison.

“We’ve got a good bunch and a good team. We need to finish up there in first or second, and that (against Widnes) will set us in good stead.”

Harrison and Leigh coach Paul Rowley were teammates at Halifax as players two decades ago, and Rowley insists Halifax are the division’s standard bearers.

“I’ve said from day one that Halifax have got the best squad in the competition this year,” he said.

“We came up with a few basic errors against Rochdale last week, and Halifax would thrive on that if we do it again. If you give them enough possession, they’ll punish you. They like playing good rugby and they’ve got some very dangerous players.”