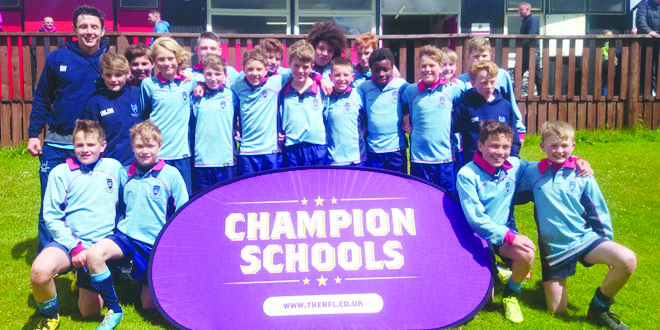 SIAN GOLDEN takes an in-depth look at Ysgol Gyfun Gymraeg Glantaf, the Welsh school that will create history at Wembley Stadium on Saturday.

Years ago, the thought of a Cardiff-based, Welsh speaking school, famous for rugby union branching out into Rugby League (as well as other sports in fact) would have been unthinkable.

But that’s exactly what my old school has done for the last two years. During my time there, the school was heavily involved in rugby union, maybe soccer and athletics; but little else.

Two seasons ago, Ysgol Gyfun Gymraeg Glantaf moved into Rugby League, and since then have never looked back. Not only have they already won a few trophies at Welsh Champion Schools level, this season for the first time, their Year 7 team made it into the national rounds of the tournament.

They progressed, beating experienced schools on the way, culminating in overcoming Barrow school St Bernard’s 20-12 in the semi-final. They will now take on Wade Deacon from Widnes on the hallowed turf of Wembley Stadium, a couple of hours before the Challenge Cup Final kicks off.

This is made even more special with the fact that they will be the first Welsh school ever to have played Rugby League at Wembley. The fact-finders among you will remember that Brynteg Comprehensive reached the final of this tournament ten years ago but at that time all finals were played at Cardiff’s Millennium Stadium as Wembley was being rebuilt.

This proves that Rugby League in Wales has an extremely bright future ahead. The hard work that Mark Jones, National Development Manager of Wales Rugby League, has done with these boys has proved invaluable and could ensure that we have a fabulously talented bunch of boys coming through to represent the red shirt of Wales in years to come. Wales head coach John Kear and those who will follow him should be very excited at that prospect.

In that Champion Schools semi-final, two tries from Cai Marcus Jemmett and one each from Gethin Marshall and Morgan Baos was enough to see them through to Wembley and teacher Rhydian Garner is delighted.

“We were coming into the unknown this year,” he said. “At such a young age this is a huge highlight for the lads. Playing at Wembley Stadium in their first season of Rugby League really is something to be proud of.

“The boys have played a lot of union before but this transition has been a great experience for them. For the experienced players, the Wembley final will only be their eighth ever game of Rugby League.

“In the quarter final we were seconds away from going home and it would have been a long journey from Hull if we’d lost but they pulled it out of the bag. Playing in these big games develops the winning never-say-die attitude which is essential.”

So why did my old school, one that’s produced union stars like Jamie Roberts (who incidentally sent his congratulations to the school on Twitter), Nicky Robinson and Rhys Patchell, add this other code to their ranks? Without even trying, they’ve already produced one international in Lewis Reece, so could there be more?

“We brought Rugby League into Glantaf in 2013-14 for the Year 10 pupils to give them another option in their GCSEs,” Garner adds. “We’re quite a strong rugby school and we saw a lot of benefits in how they developed last year in the end. I believe that you can create an all-round rugby player when they play league, union and sevens and that will only help them with their options in the future.

“A lot skills transfer over from union obviously, but the thought process is a little different and they’ve had to learn how to play-the-ball, so really you’ve got to concentrate more in League and the referee has less say on the result.”

With the same lads also excelling at other sports, winning numerous other trophies already this year, but now full focus has turned to Wembley.

“We did a solid two weeks of training before the term finished and came back for a session on the first Saturday of August,” Garner concludes. “We have then been back in from Saturday until Wednesday (August 26).

“We’ll be getting some good media coverage. S4C have been in and they will be following us at Wembley. They have filmed two days so far and have another three left to do. They are documenting us for a programme called ‘Fi’ and are following the team. Normally the programme follows an individual.”

This is all extremely exciting as the aim is to take Rugby League outside the north and Glantaf’s success showcases the fact that success in the sport can go beyond the status quo.

It is indeed the fastest growing sport in Wales, especially at grass-roots level.

At Glantaf, we’ve had a lot to be proud of. Hollywood actors Ioan Gruffudd and Matthew Rhys went there at the same time as me, as did Gethin Jones, the former Blue Peter presenter who I caught up with during his promotions for the 2013 Rugby League World Cup. But this could be Glantaf’s biggest day in our 37-year history and I am unashamed to say that I am beyond proud of my old school, and indeed any school from Wales that follows our success.

Read a full round-up of all the Champions Schools games in League Express on Monday.