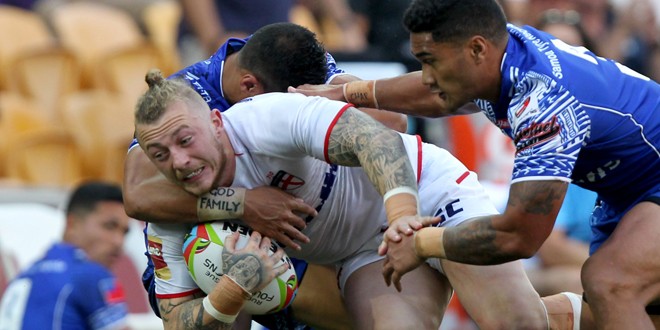 Warrington Wolves team-mates Josh Charnley and Jack Hughes are two of the eyecatching inclusions in a 30-man England Performance Squad that has been announced today (Monday).

Charnley, who won eight England caps from 2012-14, is selected for the first time since his return from rugby union last year.

Hughes has been rewarded for his performances and leadership on the England Knights tour of Papua New Guinea last autumn – on which he was captain. Robbie Mulhern, the Hull KR prop, is also promoted from the Knights tour.

Warrington and St Helens each have six players in the squad, while Castleford’s impressive early-season form in the Betfred Super League has also been recognised with the inclusion of Jake Trueman, the 20-year-old half-back who was ruled out of the Knights tour with injury, and the uncapped prop Liam Watts – joining Luke Gale, who is currently injured, and Adam Milner, who made his England debut last autumn.

Ben Currie, Kallum Watkins and Alex Walmsley are also included after recovering from the long-term injuries that ruled them out of last autumn’s Baskerville Shield victory against New Zealand.

The EPS will meet for the first time in 2019 in late April, when they will be joined by the Knights Performance Squad which is to be named tomorrow (Tuesday).

There is no mid-season international this year but Wayne Bennett, the England and Great Britain coach, will attend the second 2019 EPS meeting in June.

There are further meetings in August and September ahead of selection for the Great Britain Rugby League Lions tour of New Zealand and Papua New Guinea this autumn, and England’s participation in the World Cup Nines in Sydney.

Bennett said: “Even in a year when we don’t have a mid-season game, it’s important for us to name this squad – and also the Knights squad – early in the season.

“Jack Hughes is one of a few players who have come up into the EPS from the Knights squads that were picked last year, which is good to see.

“When you think of the number of guys who are playing in the NRL so weren’t considered for this squad, it’s a good pool of players we’re building up – both for the Great Britain tour this autumn, and looking further ahead towards the 2021 World Cup.”