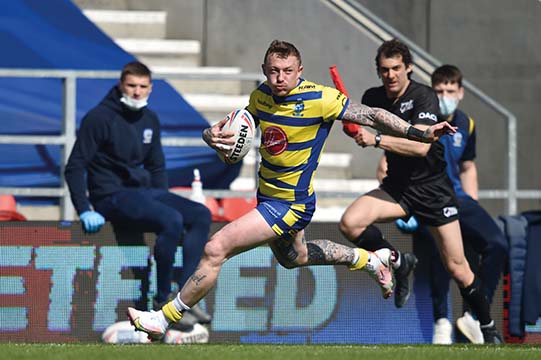 Josh Charnley is still hoping to force his way back into Shaun Wane’s England squad before this autumn’s World Cup.

The Warrington winger was included in Wane’s early training groups last year before being one of seven players to then be omitted by the national coach last November.

Charnley has had several discussions with his former club coach on why he made that decision and he says he is now determined to fight his way back into the reckoning.

“Definitely – I’m just trying to make progress with my game,” said Charnley, who had a pre-season shoulder operation this year.

“I’ve not had a pre-season for three years, I’ve had operations or little niggles every pre-season, so I’ve not had one where I can get myself ready and game fit early in the season.

“The first two weeks of the season I was nowhere near the performances I wanted to deliver, but slowly I’m building back into it and I finally crossed the whitewash with two tries.

Charnley, who turns 30 next month and is already contracted to the Wolves for next year – revealed one area Wane had highlighted for improvement from his 2020 campaign.

“I wasn’t scoring enough tries last year – I think I scored three all season,” he explained.

“My job as a winger is to score tries, and I wasn’t getting the ball, and wasn’t performing as a winger.

“I was taking more carries up the middle and trying to get the ball forward for the boys, but I wasn’t having the opportunity to score tries.

“If Waney’s got an issue with you, he won’t beat around the bush with you, he’ll tell you straight up and that’s what you want in a coach.

“I’ve had him for most of my career through Academy, reserves and first team at Wigan, and he knows what he wants.

“If you’re not pulling your weight, he’s not bothered who you are, he just gets rid.

“You look at his track record – he’s got a real good CV. If people buy into what he believes in, that England team will definitely do something this year.”

Last week saw another player that had returned to Super League from rugby union, Leeds halfback Kyle Eastmond, decide to retire after just two matches back in the 13-man code.

But Charnley has found his own transition back to Super League easier after a short stint with Sale Sharks after he left Wigan.

He added: “I was only out for 18 months, and plus at Sale we played Rugby League anyway – I was bouncing round the field like a different player.

“I didn’t find it that bad, it was just getting the body used to collision again and getting up and back.

“It was just about getting myself back into Rugby League mode.”