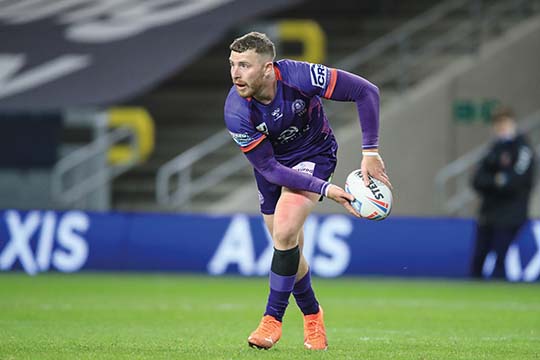 Jackson Hastings says vociferous crowds are just one of the things he’ll miss about Super League.

So Wigan’s West Tigers-bound Australian ace is happy to feel the noise once more – even if a good deal of it is derogatory!

Hastings, who will return Down Under at the end of the year, says the 1,702 who were able to watch at Leigh Sports Village on Monday made the most of being back.

Wigan followed up their 30-16 win by visiting Salford on Saturday, then come visits to Catalans and Huddersfield before the home clash with Hull KR on Friday, June 18.

“It was a bit weird (at Leigh) because we’ve got used to no one being able to boo you or chant your name or sing,” said the 25-year-old, who spent a season and a half at Salford before switching to Wigan in 2020.

“That’s one thing that I love about this country and the sport inside of it, the fans and how passionate they are and how they get involved in the game.

“In Australia it’s a completely different atmosphere, so for me to come over from that side of the world and play in front of these sort of fans is great.

“To have them back singing, either for or against us, is brilliant. It’s what we’ve all waited for.”

Wigan have fitness worries over Willie Isa and Morgan Smithies.

The 6ft 5in 20-year-old second row was signed from London Broncos ahead of last season, when he made one appearance.

“He’s a player that I’ve been holding back to play for a long time,” said Lam. “He’s very exciting, one for the fans and all of Super League to watch.

“He’s been like a wild dog on a short lead so hopefully we can let him go off that lead and attack and people will get to see one of Wigan’s next young players coming through.”