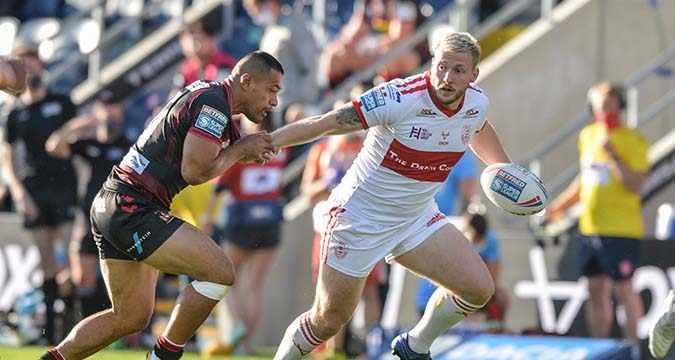 Jordan Abdull says Hull KR want to make the wait worthwhile as they prepare to play a home game in front of fans for the first time in more than 14 months.

Rovers host Leigh on Sunday having had two away games, at Castleford and Wakefield, since restrictions were eased, so allowing limited numbers of spectators back into grounds.

It’s been an encouraging start to the season for half-back Abdull and his teammates, who picked up a third win in six Super League games at Castleford.

And after a struggle last year, when Tony Smith’s side finished bottom with a win percentage if 17.65, it’s fuelled an air of optimism in East Hull.

“We’re looking forward to seeing some of our supporters again,” said the 25-year-old, who is fresh from signing a contract extension through to 2024.

“It’s been a bit of a frustration to have to wait, but hopefully we’ll mark the occasions properly, and I know they’ll give us a great reception.”

Abdull, signed from London Broncos before the 2020 campaign, says the Rovers faithful made him feel welcome from the moment he arrived.

He was already known to them, having spent the 2017 Championship campaign on loan from Hull, for whom he made his debut in 2014.

“The fans are great here,” he added. “They back us win or lose, and back in 2017, the way they took to me as a player from their biggest rivals speaks volumes.

“All the lads are aware of the importance of their continued support through the pandemic, and we want to give them something back.

“That means winning matches, and having showed some improvement this season, we want to carry it on. We can’t step off the gas.

“We have got some new players, while those already here have developed and are playing to their potential.

“This season, we’ve won a few tight games which last time, we would probably have lost, but we know we need to keep going.”

“Tony breeds confidence into players like no person I have ever known before,” he explained.

“And Danny is a huge influence, coming up with all those little details you don’t think of but which make a big difference.

“Then there’s Ben, who is doing a great job in making sure we feel fit and energetic.”