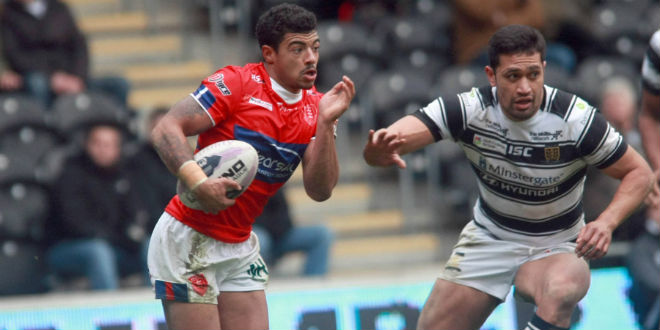 Kieran Dixon admits he never once considered taking a back seat after his Wembley horror show – and said the faith shown in him by Chris Chester since then has helped to rebuild his confidence.

Dixon openly admitted that his performance during the Challenge Cup final was far from his best – calling it “shocking” – but he has thrived in a move back to wing since then, scoring six tries in two games, including four against Bradford on Saturday.

And he said that the fact coach Chester kept him in the team after Wembley did wonders for his confidence.

“It was very reassuring to stay in the team the week after Wembley,” he said.

“Chezzy could have replaced me with a few players in the squad, but he decided to stick with me, keep me in and that’s helped me to react and respond as well as I have done.

“Everyone has a bad day at the office, lets be honest.

“Mine happened to be on the biggest stage of my career so far, which was unfortunate – and naturally the pressure came down on me after it and I copped a lot of stick, but to pick myself back up and put in two good really performances has been really good to build confidence back up for myself.”

Dixon also insisted he never wanted to be left out to take a week off to regroup, saying playing is all he wanted to do after the cup final.

“I always wanted to play against Wakefield – if I’d have missed out after Wembley I’d have been disappointed but thankfully Chezzy showed his faith in me, put me back in and its really helped to build my confidence back up.

“These performances are something I think I really needed coming off the back of Wembley. Obviously I had a shocking game there last month, but to bounce back with two performances like this in two games has been really positive for me going forward, without doubt.”

And Dixon is now targeting seven wins from seven in The Qualifiers, as the Robins head to Sheffield on Friday night.

“It’s a great run of form from us in the league, we’re on track for not losing a game in the middle eight and we’re well on the way to doing that now.

“We’ll have a tough couple of weeks ahead and we’ll have our work cut out but its definitely doable for us to win all seven.”