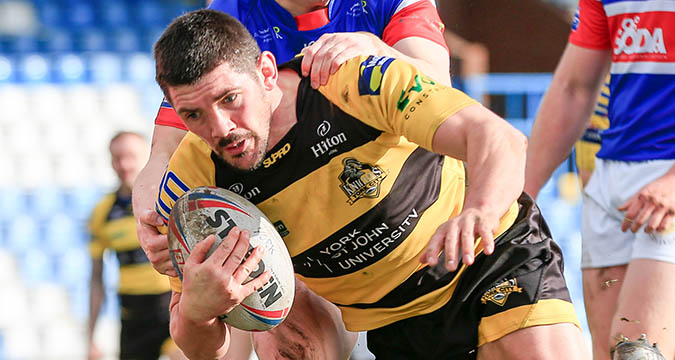 York City Knights have announced a change in captaincy ahead of the new season, with former Super League winner Chris Clarkson taking on the role previously occupied by Tim Spears.

The 30-year-old joined the City Knights ahead of the Coronavirus pandemic-hit 2020 season, making six appearances before the campaign was cut short last March.

Coach James Ford can see similarities between the two players and has paid tribute to Spears, who will still have a big influence on the squad despite the change in role.

“Tim has stepped down as captain,” said Ford.

“It’s nothing to do with his performances and he will still have an immense role at the club. He is going to have a lot of responsibilities in terms of developing other players and other leaders. He will probably actually have a bigger role at the club now than he’s had previously

“I’m very comfortable in saying he has been the best captain at the Knights since I came and his impact has been enormous in training and how we play.

“Chris is a very good professional, he selects his words carefully and he genuinely means what he says and he leads by his actions.

“Clarky is very similar to Tim Spears in that he is an effort-based player. He will be the first player behind the ball, he’ll top the off-the-ball efforts in terms of support runs and resets. Defensively, he’s really solid and he wrestles efficiently.

“I like the characteristics he has as a person. He is very honest and a team-first person and he has got plenty of drive about him.

“Clarky has got some big shoes to fill but I wouldn’t have asked him to do it if I didn’t have the confidence that he’d be able to do.”

The club have also confirmed that their first match in the new LNER Community Stadium will be a pre-season friendly against Super League side Hull FC on Thursday, March 11.