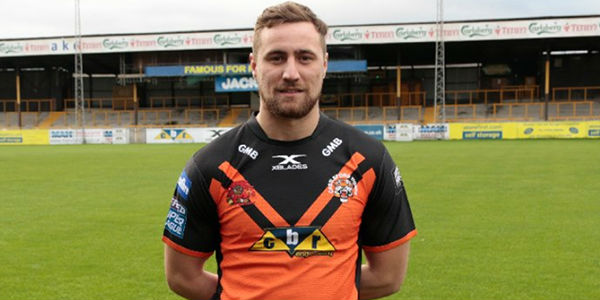 James Clare admits it’s a ‘real special feeling’ to re-sign for the club where he made his Super League debut back in 2012.

The utility back played his first three-years of professional rugby league with the Tigers, making 38 appearances and quickly establishing himself as a fan’s favourite with 24 tries.

In 2015 Clare joined the Bradford Bulls in the Championship, before making a move to Leigh Centurions for the 2017 season back in the Super League.

However, an ACL injury sidelined the player for the majority of the season, before making a comeback with six tries in five games.

One of those tries were scored during the Million Pound Game, which saw his side relegated back to the Championship after just one year in the top division.

“It’s a really difficult game to play and to get up for,” said the 26-year-old.

“Contracts are on the line and every player wants to win, but playing against the players with the same thought process. It’s a game not worth celebrating in a sense.

“The Catalans’ captain came and said a few words to the whole team at the end and expressed he didn’t enjoy it. It’s one of those things, and unlucky to be a part of.”

Now, months later Clare will re-join Daryl Powell and the club where his career began.

“It didn’t take much persuading at all to sign the contract,” said Clare.

“I jumped at the opportunity. It’s such a great club with talented players and a great challenge to be the best I can be.”

Castleford Tigers made the Grand Final for the first time in their history after narrowly beating St Helens in golden point in the semi-finals.

However, their dream year was cut short suffering a 24-6 defeat to Brian McDermott’s Leeds Rhinos.

“It’s something that the Tigers group has spoken about,” Clare explained.

“It’s something that the team as a group will remember and will continue to remember to push ourselves.

“We’ve had meetings and talked about wanting to go one better and become the greatest Castleford Tigers team ever.”

Clare will compete for the wing spot with top try-scorer Greg Eden, amongst other top names, but hasn’t ruled out a fight for the fullback position following Zak Hardaker’s suspension.

“There are some extremely talented players,” he said.

“Greg is in such good form and got a spot in the England training squad.

“Playing fullback is honestly one of those things. Eden could be challenging as well as he’s very talented. My personal goal is to be in round one, I’d even play prop.”

James Clare has joined the club for pre-season, and has spoken about his excitement to be back at the Mend-A-Hose Jungle.

“It’s a real special feeling for me personally,” he said.

“I never wanted to leave the first time around so to get another chance was great.

“They are such a bigger club and have greater ambitions since I left. Hopefully I’ll be part of something special to a team that’s meant so much to me.”