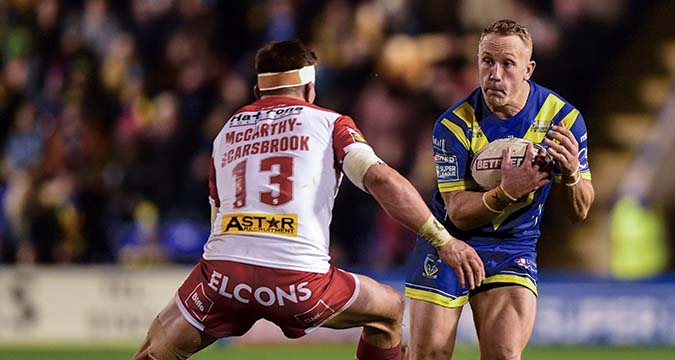 Jason Clark has revealed how the wheels were put in motion for Greg Inglis’ stunning move to Warrington.

The former Australia and Queensland star shocked the world when he confirmed last week that he would be stepping out of retirement and joining the Wolves on a one-year contract from the 2021 season.

It was a move that left Clark ecstatic, given that Inglis is a good friend of his from their time together at South Sydney.

In fact, it was a phone call between the pair that started the process after Clark jokingly suggested he dust off his boots and join the Wolves.

“I talk to GI at length two or three times a month,” he said.

“He brought something up about England and I was telling him how good it was. I said it would be good to have him playing over here. I was a bit shocked when he said he was open to the opportunity.

“I told him that if he was going to come over he had to come to Warrington, and he said he wouldn’t mind doing it. I thought he was joking.

“But the morning after he asked me to speak to Simon Moran, our owner, to see if they had any interest.

“So I told Simon I had a friend who would like to come over. So he said ‘oh yeah, who’s that?’ It could have been anyone at this point, someone from park footy or anywhere.

“Simon looked up and said ‘I thought he’d stopped playing.’ But I told him that he’d realised he misses the game and he’d like to come over.

“So Simon asked me to pass on his number and he’d get in touch.

“I left the rest of it with those two. It’s come a lot quicker than I was hoping.

“Me and my family stayed in touch every couple of days to see how it was going along. He kept telling me it was going good, then one day he told me about an app we use at the club and how would he be able to download it.

“I asked him why he had to download it and he said ‘I’m going to need it next year’.

“I was like a little kid, smiling from ear to ear. I’m just so excited; we’ve got some great young kids like Matty Ashton, Josh Thewlis and Toby King, and they’ll get so much from training and working with Greg; it’s fantastic news for the club.”

By the time Inglis pulls on the primrose and blue it will have been the best part of two years since he last laced up his boots. However, Clark insists Inglis has what it takes, not only to cut it, but also to be a force once again.

“I remember training with him at Souths when he made everyone look silly. You watch young kids play and there’s one kid who can palm them off and run around them, and he did that in training every day against world-class players.

“Anyone who has had twelve months off will benefit mentally and physically.

“Mentally he’s probably realised he’s not finished with his career. He’ll be very close to the level he was at when he comes back.

“Super League, as much as it’s the same game, physically it’s a different style. It does take some getting used to and from last year to this year I feel like I’ve grown a lot. He will have a lot of pressure on him the moment he steps onto the field. But I know how he’ll be fine doing that; he doesn’t show too much pressure and he’s a very stress-free type of person.

“He’s so effortless too; whenever I’m playing and I look at my action pics I look so stressed and there are no relaxations, whereas he looks so fluent in everything he does.”

Clark now hopes he will be able to take to the field alongside Inglis again, although he has yet to sign a new deal with the Wolves, while hoping that negotiations will be finalised this week.

“It’s been a bit hard at the moment,” he told League Express.

“We’re trying to get something done; it’s been slowly getting there and I’m waiting for my manager to finalise something.

“But I want to stay to be a part of Greg Inglis coming to the Wire. I’d like to get it off my mind, although I understand how hard it must be to negotiate contracts and promise a certain amount. But hopefully it’s something we can resolve in not even the coming weeks, but the coming days.”