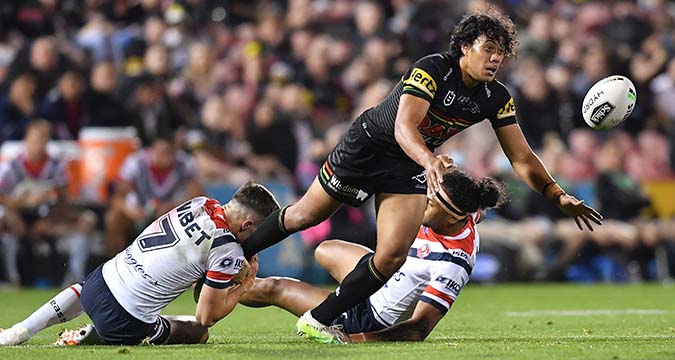 The Roosters opened up an early 10-0 lead but the Panthers scored 28 unanswered points to gain control. The Roosters came back but Cleary’s field goal with two minutes to go sealed the home side’s win despite a late try from Angus Crichton.

The Roosters started on fire, opening up their lead. Just like last week, Josh Morris scored the opening try and that was followed by Freddy Lussick’s effort from dummy half.

Down by 10, the momentum changed when Penrith forced Brett Morris over the sideline when under pressure and within two minutes the home side were on the board through Josh Mansour.

Then just after the midpoint of the first half, Penrith levelled through Cleary’s first before taking the lead when the halfback got hold of Jarome Luai’s (pictured) kick.

And Cleary completed his hat-trick three minutes out from the break when he supported Stephen Crichton’s break.

Penrith started the second half with a missed penalty but the ball bounced off the post into the hands of the Panthers and they scored moments later through Stephen Crichton.

Down by 18, the Roosters mounted a comeback with tries for both James Tedesco and a second for Josh Morris. But Penrith steadied and sealed their win with a field goal from Cleary with two minutes to play.

Angus Crichton charged over for the Roosters in the remaining seconds but Penrith hung on.