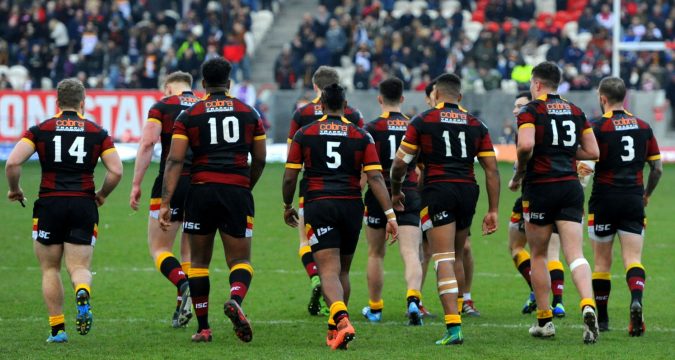 Someone once told me that if the demise of Bradford Bulls had happened to an American sporting franchise in similar fashion, it would have been made into a Hollywood blockbuster.

In the space of 11 years, a club that were the best side in the world have now been consigned to the sport’s bottom-tier in 2018. Administrations, scandals and even a liquidation thrown into the mix for good measure – it has been a regrettable period in the history of one of rugby league’s most famous brands. Who will be held accountable for this mess (more on that later)?

As everyone in rugby league knows, the rumour mill is in overdrive about ‘secret plans’ to rejig the Championship in 2018 and keep the Bulls in the competition in some fashion. But simply put, that has to stop now – for the sake of the club itself and the integrity of rugby league as a whole.

First of all, there’s the club. It remains a peculiar and baffling decision that the Rugby Football League opted to keep the new-co in the Championship this year; Nigel Wood said in January it could have ‘disenfranchised season ticket holders’ at the Bulls – but in reality, keeping them on life support in the Championship with reduced funding and a 12-point deduction has done pretty much the same. Around 2,500 people watched the Bulls’ relegation confirmed with defeat to Toulouse on Sunday: 4,151 watched them beat Toulouse 29-22 back in February. That’s 1,600 fans gone in a matter of six months.

Too often over this decade of disarray have the Bulls – and Bradford fans – been left with one hand tied behind their back. Whether it’s points deductions, central funding cuts (some of which have been deserved, for the record); the Bulls have rarely had an opportunity to start afresh. In January, the new owners should have been given the chance to start with a blank canvas by starting at the bottom – League 1. Fans would have been on board with the vision of a new start and a new era – Bradfordians are insanely loyal folk and as crowds at Odsal have shown, thousands have stuck with them even in the darkest of times. It’s 12 months later than it should have been but thankfully, the club have this opportunity again next season with no penalties and the opportunity to build without any pressure or fear of relegation.

Is it ideal for a club who were champions of the world 11 years ago? Of course not. It will likely mean a hybrid part-time/full-time squad which is not great, but if the owners are true to their word – I have no reason to suggest they are anything but – and invest in the Academy and stick with the club, then relegation could hand Bradford the chance to build sustainably and efficiently from the bottom up. As someone who hails from the city and has family and friends who still watch the Bulls to this day, I’m told if Nigel Wood and Ralph Rimmer went onto the Odsal terraces and took a straw-poll of which division they felt Bradford should be in next year, most, if not all, would say League 1. Listen to the supporters, guys. They are the biggest stakeholders of all and deserve a voice.

Furthermore, should a rejig of the Championship take place, it will only leave a bitter taste in the mouths of many fans who feel Bradford are being given preferential treatment. Bradford are a valuable brand for the RFL, that is without question: but letting them go may be the best thing in the long run rather than propping them up.

Will those who have contributed to this decade of disarray ever be held accountable for what has happened to the Bulls? Fans have been left wondering what is going to happen and been left in the dark time and time again – surely someone can be held up to explain a farcical, ludicrous series of events which have culminated in relegation to League 1?

Sadly, it seems that will likely never happen. But what can happen is that the new Bradford Bulls, the one who were born at the start of this year, can slowly build their way back into something like the side who were crowned champions of the world 11 years ago.

It will take a lot of time and a lot of hard work – but relegation to League 1 has to be allowed to happen. It will protect the sport’s integrity and, more importantly, it will give the club perhaps their best chance of making a go of it.