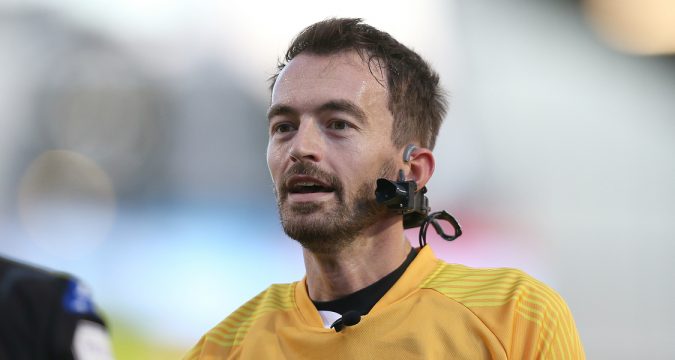 We have a problem.

The ugly incident involving James Child following Salford’s defeat to Leeds seems to have finally made people aware of the fact the sport’s attitude towards referees has deteriorated to unacceptable lows.

As a sport, we keep preaching that we’re a family sport. Incidents like this suggest otherwise.

This isn’t an issue that has suddenly come to the fore, either, it’s been festering for quite some time.

The standard of refereeing has become an increasing talking point recently. Fans are becoming more and more aggrieved at decisions, some openly reveal their belief that referees have agendas.

But the reality is that many of these sentiments are triggered and are a result of the attitude towards referees at the top of the sport.

In the latest round of Championship fixtures, three players were sin-binned for dissent. One of those players, Batley’s Macauley Hallett, was sent-off for continuously voicing his discontent towards the official.

It comes in a week when Leigh Centurions owner Derek Beaumont was fined for his comments about the standard of officiating and Hull FC player Marc Sneyd was cautioned for disputing a decision in a recent game.

There have been other high-profile incidents recently, including Danny McGuire’s suspension for abusing a match official in a Leeds game.

Referees copping some flack isn’t anything new, nor will it ever be eradicated, but the line is being crossed more often by players, club representatives, supporters and everyone else, including the media. This simply has to stop.

The actions at Salford triggered a strong, commendable response by the Red Devils and their CEO Ian Blease. But the fact their Twitter account insinuated Child had adhered to the wishes of Leeds fans by sin-binning Junior Sa’u, for a high tackle that gave Kallum Watkins a concussion no less, goes further to highlight the problem.

The Leeds fans are asking for Sa’u to be sin binned for a high tackle and Child gives them what they want. 10 minutes off for Junior.

Salford’s Twitter account shouldn’t be singled out here. You can scroll through the tweets of almost every club and find Tweets that question the decisions of officials. Any supporter reading tweets of such manner will naturally feel more incensed.

It’s why the sport needs to completely overhaul its stance on this and find a way to eradicate it from the top.

Clubs are right to come out and voice their disapproval at the excessive abuse towards match officials or anyone else in a stadium for that matter.

Wakefield’s Michael Carter condemned the level of abuse aimed the way of officials.

But a stern warning on the potential consequences will only be respected if the behaviour of the players and associates of all clubs start to change their actions too.

The media have to take responsibility as well, rather than simply get on their high-horse after recent events. Referees do, at times, make mistakes, some worse than others. While bad decisions shouldn’t be ignored, nor should the officials be unaccountable for their actions, it should be left to those in charge of the officials to take the appropriate action, just like a coach would decide the consequences if a player has had a poor game.

Only then can things change for the better.