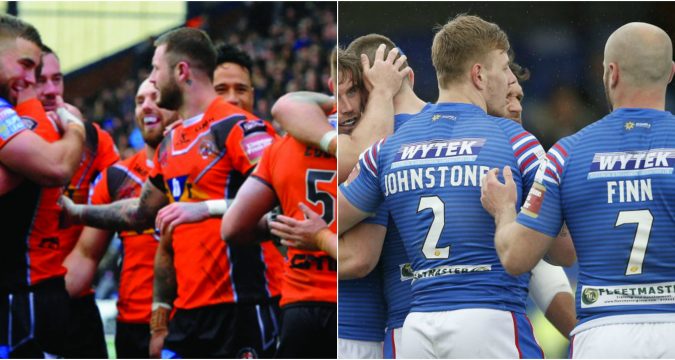 In many ways, it is fitting that Castleford can secure a first-ever League Leaders’ Shield against Wakefield this weekend.

Come 8pm on Thursday night, it will be all eyes on the Tigers as they look to finish top of rugby league’s first division for the first-ever time in their 91-year history. Make no mistake about it, this is a big deal for the town and everyone involved with the club – even if other people have tried to suggest it isn’t.

But 11 years on from the inaugural ‘Million Pound Game’ in which the Tigers were relegated, it’s only fair that their opponents both that day and Thursday night get a slice of the limelight on Thursday night too.

Simply put, Thursday night should be a celebration of how far rugby league has come in a part of the world where it has struggled to make an impact since the inception of Super League.

Yes, Castleford are the story and Castleford are the team who will be lifting silverware on Thursday should they avoid defeat to Wakefield. But really, in this most unpredictable of seasons, who is simply assuming that will happen without a hitch?

Wakefield are coming to spoil the party: and they do so with the knowledge that if they play to their potential, they will be the ones leaving celebrating on Thursday evening.

But irrespective of the result, it’s difficult to imagine where both these great clubs were little over a decade ago. When Castleford were relegated at Belle Vue at the expense of Trinity, it would have been unfathomable to imagine one, let alone both, of the two West Yorkshire rivals in title contention.

When it was Bradford, Leeds, St Helens and Wigan monopolising the competition in its formative years, it was hard to imagine any club forcing their way through into the leading pack. Bradford have quickly wilted and tumbled down the leagues, but that Cas and Wakey can mix it with leading lights like Saints and Wigan on a regular basis is a great endorsement for the health of Super League on the whole – as well as its competitiveness.

Under Daryl Powell and Chris Chester, the future is bright for both clubs. It is not inconceivable that these two sides could meet again in six weeks or so in a play-off semi-final – indeed, if the league table finished how it is right now, that would be the case, with Cas and Wakey playing for a place at Old Trafford.

Castleford will win the League Leaders’ Shield at some point – whether it is Thursday, the week after the cup final or beyond that. But no matter what happens this weekend, rugby league is in a very healthy place in both Castleford and Wakefield right now.

And fans of either club should be delighted that’s the case following the lean periods both have endured throughout the Super League era. That alone is cause for celebration at the weekend.