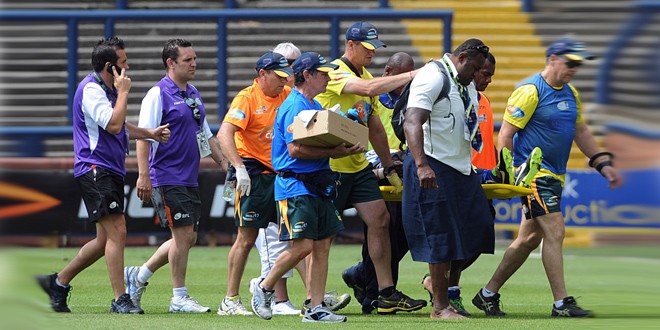 The issue of concussion is becoming very important, both in Super League and in the NRL.

The impact on a player’s long-term health of repeated concussions is of growing concern, as evidence comes to light that seems to suggest that former players can suffer early dementia that could be traced back to knocks on the head that they suffered during games.

How often have we seen players who are clearly wobbly on their feet, but who stay on the field and continue with the game when they are clearly feeling groggy?

The issue is serious enough for the RFL to have issued new guidelines in February, with the aim of giving players more protection, and actually protecting players from themselves.

Last week in Australia the NRL released information about its new concussion rules and how they have been applied during the first five rounds of the Telstra Premiership. NRL Head of Football, Todd Greenberg, set out the statistics.

27 players were taken from the field to undergo Sideline Concussion Assessments (SCAs). 14 of those players returned to the field after being cleared of concussion. 13 did not return to the field.

Five clubs have been given “please explain” notices in relation to their compliance with the new concussion rules. Several inquiries are still ongoing.

The NRL had issued one breach notice, to the Bulldogs, for an incident involving their forward Josh Jackson in Round 2. The club was adjudged not to have followed the guidelines, and Greenberg revealed that it would be fined $20,000 for the breach. As it was a first breach, $10,000 will be suspended but the club will be liable to pay this if there are any further breaches during the 2014 season.

“Given this is a new policy we are very pleased with the way clubs have enforced it,” Greenberg said.

“It is clear that they are taking the new rules seriously and are acting quickly to assess and treat players who suffer a head knock.”

He said that the policy would remain under continual assessment.

“We know that the club doctors and medical staff are best placed to determine whether a player should return to the field after a head knock.

“We believe they are overwhelmingly acting in the best interests of their players but we will continue to take action where a breach occurs.”

I thought about the NRL’s policy when watching Hull FC playing Huddersfield on Thursday. Giants player Chris Bailey took a knock to the head shortly after the kick-off when he tried to tackle Joe Westerman. He received treatment on the pitch, but stayed on the field and carried on playing.

The Giants’ medical staff are far more expert than I am, and they were happy to see him carrying on.

I wonder, though, whether all players who suffer knocks should be brought off the pitch, at least for a while. And if that we to happen, I don’t think a replacement player should count as a substitution.

I don’t know whether the RFL keeps records of concussion incidents in our game, but I’m sure the information would be just as interesting as it is for the NRL.

Want more Rugby League news and features? Subscribe to the online version ofLeague Express newspaper and Rugby League World magazine. You can alsoconnect with Total Rugby League on the social media platform of your choice.