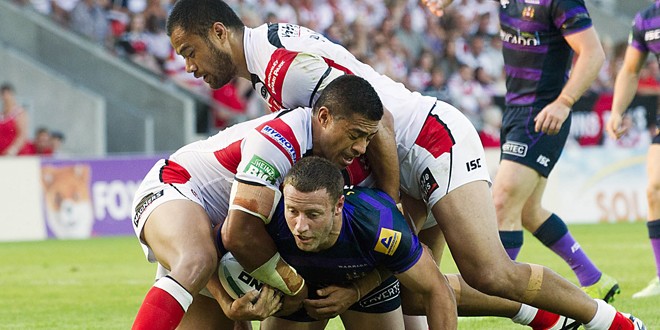 It is top of the table versus last year’s champions this lunchtime, as St Helens face Wigan in a colossal derby clash at Langtree Park.

With the ground expected to be filled to capacity, it promises to be a special atmosphere as two of the best sides in Super League lock horns in a mouthwatering clash. However, the home side’s injury problems have resurfaced once again, as they look to keep their unbeaten start to the season going. Forwards Willie Manu and Anthony Laffranchi are both unavailable for Nathan Brown, after they picked up injuries during last week’s win over Castleford.

For Wigan, they are almost at full strength, with Josh Charnley their only real injury absentee. Matty Smith and Liam Farrell come back in after being rested for the win over London last time out.

The Stats
The two sides are incredibly well matched in terms of derby victories in the Super League era. St Helens have won 28 times, whilst the Warriors have prevailed on 30 occasions. There have been four draws.

Saints’ Tommy Makinson is on an astonishing scoring run, having scored tries in each of the Saints’ last six games (1-2-1-2-2-1).

The Saints share the longest winning streak in the game with Leigh, having both won their first nine matches of 2014. Wigan have won their last five matches. Their last defeat was 36-31 at Castleford on 9 March.

The Prediction
An almost impossible one to call, this. Realistically it could be the end for St Helens’ unbeaten start to the season, but as we have seen so often this year, the Saints never know when they are beaten. Home win by the slenderest of margins.