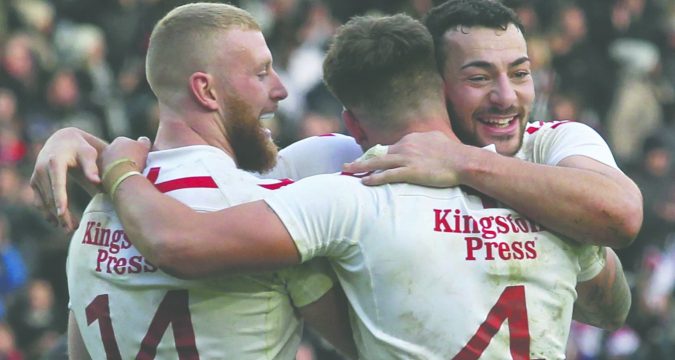 England centre Jake Connor is excited to be playing against New Zealand in the second Test at Anfield, the home of his beloved Liverpool.

Connor played at centre in England’s opening Test victory at the KCOM Stadium in Hull and the back is looking forward to gracing the Anfield turf.

“It’s one I wanted to play in. Since I’ve been three years old, I’ve always supported Liverpool. I know how special the atmosphere is and I hope it’s the same when we play there,” said Connor.

“We need to get it filled. We need the atmosphere. It definitely helps us, as a team, getting our own crowd there.”

“I’ve played at Wembley and St James’ Park but I’d rather play at Anfield. It’ll be a special feeling. Hopefully, we can get another win and seal the series.”

Meanwhile, Connor has warned clubmate Albert Kelly that he is aiming to take the number six shirt from him next season at Hull FC.

Connor, widely regarded as a utility ever since breaking onto the scene as a teenager at Huddersfield, admits he is now targeting a permanent place in the halves in 2019, which means usurping Kelly as the club’s starting stand-off.

“We had an end-of-season review at Hull on how the season went and about next year – and yeah, I’m pretty much going for that six shirt for next season,” Connor revealed.

“Obviously I’ll play anywhere – that’s up to the boss. But I want to go and play six and if that means going toe-to-toe with Alby. I know he’s my team-mate, but that’s what I’ll have to do!”