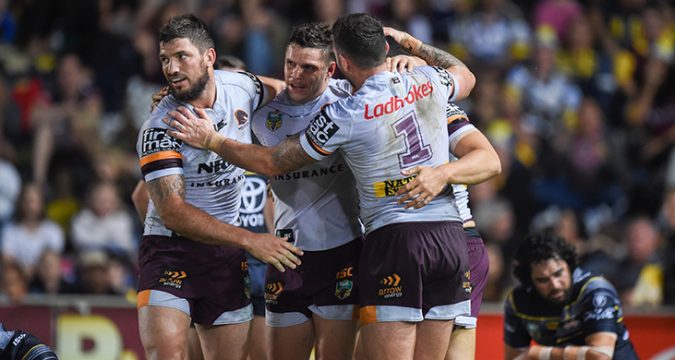 The Broncos started the brightest, notching the first try on 13 minutes. Anthony Milford feigned to kick under pressure, grubbered to himself before sending James Roberts away. The centre found Matt Gillett on his outside who scored.

Brisbane were in again on 19 minutes when Kodi Nikorima this time broke through and kicked for Roberts on his inside. Kahu converted to extend the lead to 10. The margin would be 14 when Nikorima aimed a high kick at struggling Cowboys winger Antonio Winterstein, the winger being out jumped by his opposite Kahu.

North Queensland got themselves on the board with eight to go until half-time. A short pass from Michael Morgan was taken in by Gavin Cooper who reached out to plant the ball on the line. Ethan Lowe’s conversion left the score at 14-6 at half-time.

After Ben Hampton had been held up over the line for the Cowboys, it was Brisbane who struck first in the second half. Stand-in hooker Ben Hunt fed Adam Blair who spun at the line to crash over. Jordan Kahu’s conversion making the score 20-6.

Brisbane then withstood a barrage of Cowboys attacks to seal their victory. They were however broken finally on the last play of the game when Morgan found Kyle Feldt with a cut-out pass.