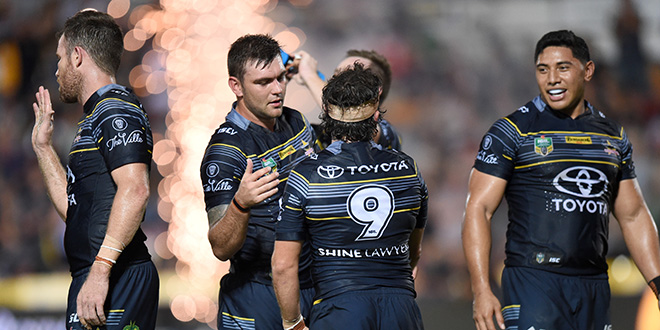 Michael Morgan was outstanding today in the Australian capital as he guided North Queensland Cowboys to a 31-18 victory that has almost certainly ended the Canberra Raiders’ finals hopes.

The Raiders came into the game with Kurt Baptiste replacing Josh Hodgson at hooker and Scott Sorensen coming onto the bench, while the Cowboys fielded the team that was published the previous Tuesday.

The Raiders scored after just three minutes when Elliot Whitehead touched down a Blake Austin grubber and Jarrod Croker converted.

The Cowboys responded when Morgan offloaded on the fifth tackle to debutant Te Maire Martin, signed from Penrith as cover for the absent Johnathan Thurston, who went over the line unopposed, with Ethan Lowe adding the goal and then a penalty on 22 minutes.

Croker was forced from the field with concussion before Antonio Winterstein scored to stretch the Cowboys’ lead to six points and on the stroke of half-time Lachlan Coote extended that lead to seven points with a field-goal.

The Radiers got to within one point when Joseph Tapine touched down, with Aidan Sezer converting, but two converted tries from Morgan stretched the lead to 25 points.

The Raiders hit back with a thrilling try by teenage winger Nick Cotric, but the Cowboys assure victory with Martin’s second try, with all of them being converted by Lowe.