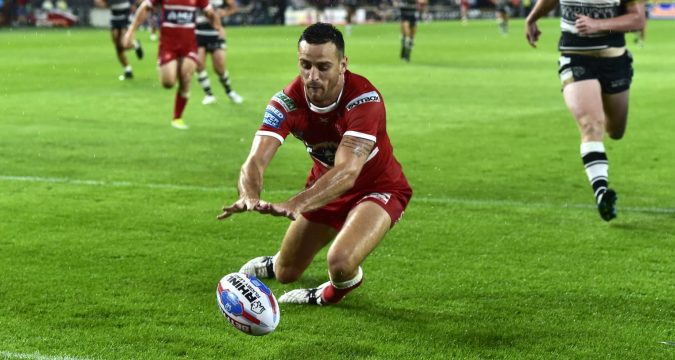 Craig Hall admits he is playing for a new contract at Hull KR in 2019 – after conceding he has unfinished business with the Robins.

Hall has returned to his former club with a bang, impressing since signing from Leigh just hours before the transfer deadline – including the hat-trick of tries on Saturday which helped Rovers beat Leeds 38-36.

It is Hall’s second spell at Rovers – but he admits the club is a different place to the one he left in 2014 as they close in on Super League survival.

He told League Express: “I suppose there is a bit of unfinished business here – but it just feels right being back part of this club.

“Personally it’s great because there’s no more 4:30am wake-ups to drive all the way along the M62 to Leigh, I can enjoy a bit of extra time in bed and drop into training.

“I want to stay, but I’ll take it game-by-game and we’ll see what happens. There’s been improvements since I was here the first time, but whenever you walk into the dressing room the mood and the buzz just feels right.”

Hall’s hat-trick helped the Robins make it two wins from three in the Qualifiers – and with home games against Halifax and London next up, Hull KR appear to be in a much more favourable position than two years ago, when they were surprisingly relegated.

Hall, however, has insisted Tim Sheens’ side can take nothing for granted.

“Coming here on the back of going to Canada and getting a win, we needed four points,” he said. “One win wouldn’t have been too bad but this makes it a brilliant start, I think.

“We’re gonna have to turn up over these next few games despite that, though. I’ve played against Halifax and London this season and they wont come and lie down, they’ll come firing.

“Scott (Murrell) will have them fired up coming back to Craven Park too.”

Hall also admits his link-up with former Leigh team-mate Ben Crooks has also helped him settle in with such impressive form.

“It’s been pretty good since coming back,” he said of his pairing with Crooks.

“There was a blip for us all against Salford, but personally I’m really enjoying it. I’m just waiting for Ben to put me over for a try to be honest as he hasn’t yet! But in all seriousness, we work well together and Tim gives us a good gameplan and we stick to it.”