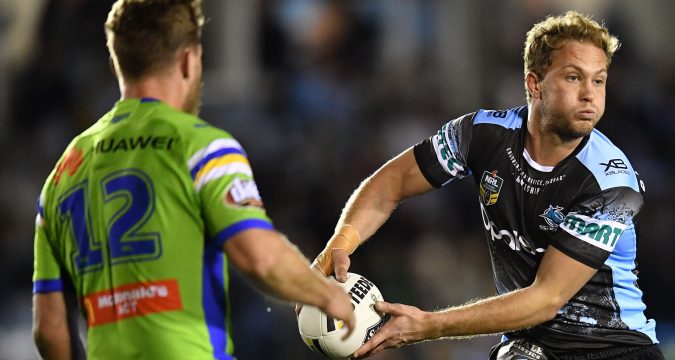 Cronulla Sharks, inspired by Valentine Holmes, kept up their pursuit of a top-four spot with a 28-24 win over Canberra Raiders.

Canberra made a poor start. They fumbled the first play-the-ball through Dunamis Lui, had Jordan Rapana sin binned for a professional foul and conceded the first try to Andrew Fifita, all in the opening ten minutes.

Despite Chad Townsend’s missed penalty attempt, the Sharks continued to extend their lead. A move out to the left involving Wade Graham, Holmes and Edrick Lee resulted in a try for Ricky Leutele.

But the Raiders were able to stay in the game. Jordan Rapana and Joey Leilua combined to send Brad Abbey over for his second NRL try.

Holmes was on fire at fullback for the Sharks. He finally got his deserved try with five minutes to go in the half. There was even time for Graham to score his well-earned try before half-time. The Sharks went into half-time leading 22-6.

The Raiders scored within 90 seconds of the restart. Warrington-bound Blake Austin took a quick tap, got into the in-goal and offloaded to Joey Leilua. They scored again after an Elliott Whitehead break set up Leilua’s second try in the opening ten minutes of the half.

But Canberra’s fightback ended in controversial fashion. Sione Katoa wandered in to score as the Canberra players had stopped due to the linesman’s flag being raised to draw the referee’s attention to a knock on he saw. The bunker didn’t see it, however.

The Raiders continued to fall foul of calls from the officials when Brad Abbey’s try was disallowed due to Leilua’s forward pass which looked to be good. Jordan Rapana’s try with three to go made the difference four but the Sharks hung on.