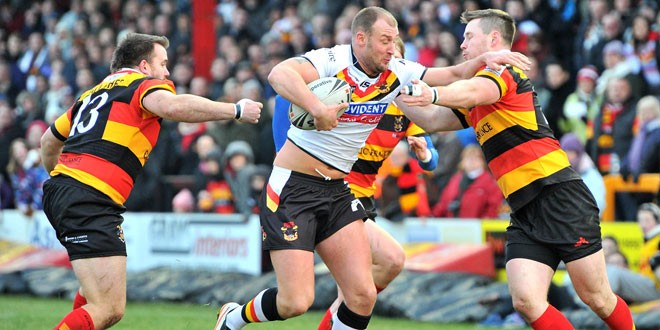 Former Bradford Bulls Super League star Michael Platt (pictured) will feature in the North Wales Crusaders side set to take on Leigh Centurions this Sunday as head coach Clive Griffiths looks to improve on their display against Widnes.
The Wrexham-based side are likely to face an under-strength Centurions side – due to their game against Salford City Reds on Friday night – in their second pre-season outing.
Griffiths said, “We’ve talked about certain areas in training that we want to work on from the Widnes game.
“It was the same as last year though; there was a lot that we needed to work on from the first hit up against Swinton.
“There are things that we did against Widnes that are good to look at and that’s really positive working forward.
“But what we’ve got to remember is that these are friendlies – and you don’t win promotion or get relegated from these games.
“We’re working towards the first league game against Barrow – that’s when it gets important – and we’ll be trying a lot of new things between now and then.”
A handful of injuries were picked up in the game against Widnes, meaning that Griffiths will have to shuffle his side around against Leigh.
He added, “Michael Platt will play in the game as he is now a lot better, so that’s a new face that the fans will be able to see on Sunday.
“It’s looking unlikely that Mark Offerdahl will play – he may need a bit more time with us yet before he plays.
“Andy Moulsdale also picked up a knock in the game and Jamie Dallimore is unavailable so we’re a bit short in the half-backs.
“The Ashall brothers both picked up injuries too. Craig definitely won’t be back but we’ll check on Karl. We’ve got plenty of hookers that we can play so we won’t rush him back if we don’t need to.”