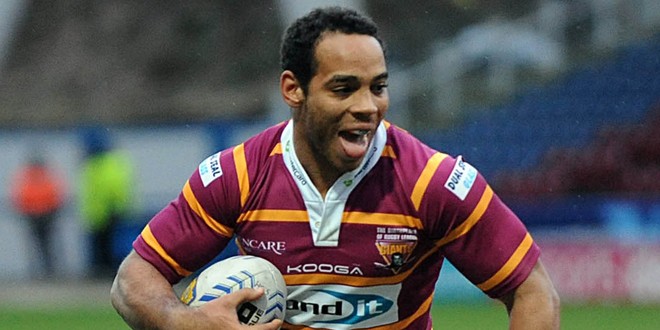 England international Leroy Cudjoe has committed his long term future to the Huddersfield Giants and looks set for a career as a one club man.

The 27-year-old centre has extended his current arrangement with the club until the end of the 2020 season thus guaranteeing him a further five years at Huddersfield.

The hometown academy product from Newsome Panthers has made 210 appearances for the Giants, scoring 94 tries – as well as making 12 England appearances since he debuted back in 2008.

Giants head coach Paul Anderson said: “I still think Leroy has many of his best years ahead of him and whilst centre is where he has played most of his recent Rugby his ability to drop into other positions makes him a very valuable member of the squad.

“The reality for me is simply that he is a very good player who the club have brought through the system and his challenge now is to ensure that he grasps the opportunity to realise his position in the group is one that others look up to and expect to see consistently high class match winning performances from him.

“I know he is disappointed that he has lost his place in the England side and we want to see him back in there and both he and I know what he needs to do to achieve that which if he does, will be a great boost to his team here.”

Cudjoe said: “I am very proud to represent my home town and I think we have a great side here that can only get better with age.

“I want to get my place in the England team back and the best way to do that is to be successful here this season which is what we’re all working towards. We have been in the mix for trophies now for a good while and I want to be a key part of the team that’s the first to bring home one of the big two prizes.

“I am now one of the longest serving players on our books and enjoy working in and around the town with the younger players to try and encourage more support which we all know we deserve. Our form on the pitch has deserved better but our loyal supporters never leave us and I hope that I can repay their faith in me by playing my part to take us to even greater success.”