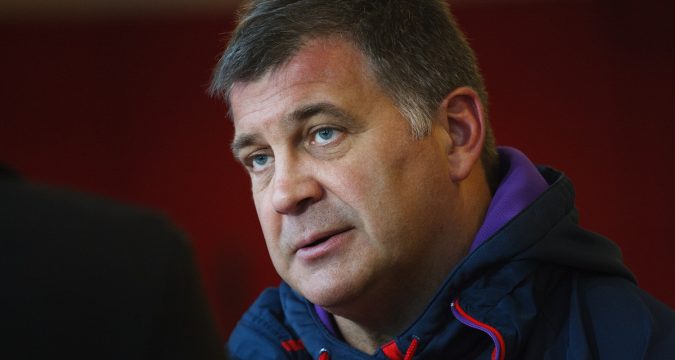 Keiron Cunningham says Wigan Warriors boss Shaun Wane was among the first to congratulate him on his appointment as St Helens’ new head coach.

The two were arch rivals nine days ago when Saints beat the Warriors 14-6 in a Grand Final marred by the dismissal of Ben Flower for punching Lance Hohaia, but Cunningham revealed the friendship which exists between the two former players.

“I didn’t know I had that many friends,” said Cunningham, who has been promoted from the role of assistant to succeed Australian Nathan Brown.

“Shaun Wane was on the phone before the press conference. Shaun is a really good friend of mine.

“(Castleford Tigers coach) Daryl Powell has also been on. He’s another good English coach and it’s good to have a good crop of English coaches coming through.”

The appointment of the 37-year-old former Great Britain hooker, on a two-year deal, leaves just two overseas coaches in charge of the 12 First Utility Super League clubs – Warrington Wolves’ former England boss Tony Smith, who has British citizenship, and Wakefield Trinity Wildcats’ James Webster, who at 35 is the youngest head coach in the top flight.

Cunningham, who insists he is ready for the role, was the logical choice to take over from Brown, who stepped down after the Grand Final in order to take his young family home to Australia.

The newly-crowned Super League champions readily agreed to release the former St George Illawarra and Huddersfield Giants boss from the 12 months remaining on his three-year contract in the knowledge that they had a ready-made replacement.

Cunningham, who joined the St Helens backroom staff after bringing his 17-year playing career to a halt four years ago, assisted then general manager Mike Rush for most of the 2012 season following the departure of Royce Simmons and acted as the right-hand man to Brown for the last two years.

“I had agreed an extra two-year contract as an assistant but the idea was for Nathan to get me up to speed and, if I was ready, then I’d get the job,” said Cunningham.

“I’ve always seen myself as a leader. From being young, it’s something I’ve always done. I never knew the timing but I swore to my wife that I was never going to rush into it. I’ve seen too many great players who have probably gone into a head coach’s role a little bit too soon. They thought they knew everything but fell flat on their face.

“I’m quite a humble person and, if I wasn’t ready, I wouldn’t have taken the job.”

The appointment is sure to go down well with supporters, who in 2010 overwhelmingly selected him from a list of all-time greats to be the subject of a bronze, life-size statue, which was erected in the town centre and relocated to Langtree Park when St Helens moved into their new stadium three years ago.

“It’s been an easy decision because Keiron is ready,” said Rush, who is now chief executive of the club.

“He wants the job and that was the single biggest question that we asked.

“We’ve seen him develop and we know he’s ready. He knows the players inside-out and he knows the club inside-out.”

Cunningham is confident of a smooth transition, having helped Brown reshape the squad over the last two years and play a key role in the signing of Hull KR stand-off Travis Burns and London Broncos forward Atelea Vea for next season.

“What Nathan has done for this club has been immense,” Cunningham said.

“He’s basically rebuilt the squad and put us in a good spot.

“There is nothing much going to change. We’ll fine-tune things if we can. I’ve been in charge of the attack for two years now and, if anything, we’ve added a bit of extra spice with bringing in Travis and Atelea.

“I look upon Burnsy as my first signing because I had quite a big influence in getting Travis in. He was my number one man.”

Cunningham will put together his own backroom staff, which will include former New Zealand Test centre Jamahl Lolesi, who worked alongside him after following Brown from Huddersfield two years ago.

Long-serving captain Paul Wellens, 34, who is out of contract, is set to sign a new deal and play on in 2015 before eventually joining Cunningham’s coaching team.

“I think this year will be a good one for me to help him with his transition into the other side. He’s doing a bit of coaching with England at the minute and we’ll probably do a bit more with him next year.”

Cunningham is the club’s second British head coach in the history of Super League. Ellery Hanley held the post from 1998 to 2000 in between spells by Australians Shaun McRae, Ian Millward, Daniel Anderson, Mick Potter and Simmons.