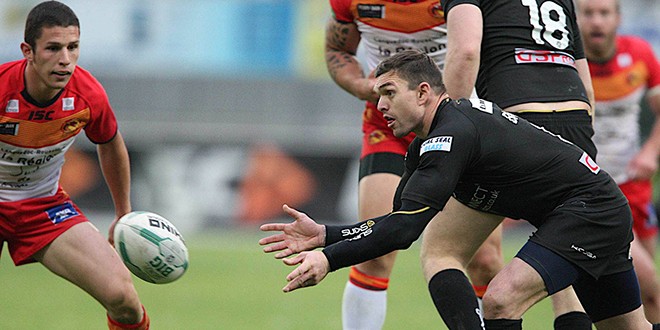 Danny Brough says he is ‘over the moon’ to be voted Super League player of the year for 2013 by League Express readers.

The Huddersfield Giants stand-off received over 50 per cent of the fan vote and was also named best stand-off in the league in another landslide.

The 30-year-old also won the Man of Steel award, the Albert Goldthorpe Medal, and was nominated for Rugby League International Federation player of the year honours. He is also still in the running for the prestigious Golden Boot, which will be revealed in the next issue of Rugby League World, out January 17.

“It’s class, to be fair,” said the Scotland captain.

“It’s something you don’t think you’ll get, you don’t think one season can be that good. I didn’t think I’d get half as much as all these awards, but I’m really pleased that I have.

“It’s good to get recognised for something you enjoy doing. I’m over the moon.”

Brough was reunited with his Giants team-mates last week following the Christmas break. The Giants have now flown for warm-weather training in Florida, and Brough realises he has some catching up to do.

“It’s been my first day back today,” he said.

“It’s been hard, but that’s pre-season for you. The lads have been going a while now, and I just need to catch up.”

The former Wakefield and Hull star claims he and his side are not under any pressure to repeat their 2013 successes.

“I wouldn’t say there’s any pressure to perform again,” he said.

“We are trying to replicate last season, which will be hard to do, but you try to give 100 per cent. We put more pressure on ourselves to try and achieve one of the main trophies. We will try to be consistent again and to win every game, but as long as you finish in that top eight you still have a chance.”

Brough believes a strong start to the season is key for the Giants to achieve their goals.

“We want to finish the pre-season strong and go into the first few games and get a couple of wins, because it helps your season if you win the first couple and kick on from there.”